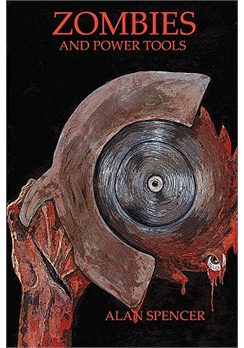 I sit now, typing this review with smug satisfaction curling my lips into a smile. I’ve just finished reading Alan Spencer’s gore streaked zombie novel, Zombies and Power Tools, and I gotta say I’m impressed with his take on the walking dead. Mr. Spencer introduces us to a quiet little town and many of its inhabitants before cheerfully slaughtering damn near everyone. And did I mention the gore? Okay, we’ll get to that in a minute.

The story opens up with the town’s mortician, Sam Kolke, working late at night to fill a special request by grieving family for the body he had been preparing for her funeral. He finishes his task just as the lights go out. He finds himself surrounded by withered, long buried corpses. These corpses dig into his arm and use his own blood to scrawl the cryptic message ‘CONFESS MURDERER’ across the wall. So begins a different take on the undead, rather than an apocalyptic scenario Zombies and Power Tools is a pulpy murder mystery with the undead moving the story along with gruesome massacres.

After the first incident we slowly met more and more town’s people including the Sheriff, The town’s rich playboy, and Sam’s son Ryan who happens to be the aire-apparent to the Kolke Cemetery. At first, the dead only reveal themselves to Sam. This coupled with the bloody message sets the tone as Sheriff Hardwick refuses to believe that Sam saw real dead people and he insists it was people playing some kind of sick joke. Also at this point we get the first hints of a long buried secret that Sam, Sheriff Hardwick, and Walter Guyer (the aforementioned playboy) all three share. This secret is the back bone of the story but it is revealed in due time, little pieces of truth emerging at a time until the suspense seriously makes you want to flip ahead and figure it out. Resist the urge and read through this gem of a zombie story.

As the title suggests the zombies do indeed end up packing around an arsenal of whirling, cutting, grinding power tools as they work their way through the town’s people. No one is safe and a wide variety of town’s people end up hacked and a few even fed to a monstrous meat grinder, known as The Butcher Boy, as the main characters struggle to solve the mystery of the risen and morbidly violent dead and their chilling message of ‘CONFESS MURDERER’.

Mr. Spencer takes his sweet time building the story, and the first little bit is split between character development and great gory action. The story feels a little slow until the action really kicks in, and kicks in it does, but the characters are well developed and realistic making the pacing perfectly justified. There are several references to Lillie Table and Frank Mueller (the later a junkie stripper and the former a serial killer) and as the story unfolds you realize each has a place in this twisted story of revenge and guts. Once the dead people start hacking people up and feeding them to the meat grinder of doom my eyes were glued to the book and the pages flew. Also, at this point the gore steps to center stage and, I must say, it shines once there. As the bodies pile up and the river of blood and guts gets thicker and thicker the secret is slowly revealed. I feel the twists here keep pace with the ultra violence bringing the story to a conclusion that will send shivers up your spine and test your gag reflex.
This is my first experience with Alan Spencer’s work and I will be keeping an eye open for him in the future as this story is a wonderful mix of plot, character, and pure unabashed gore. Highly recommended to gore hounds, zombie fans (looking for a change of zombie functionality), and even fans of good old fashioned murder mysteries.