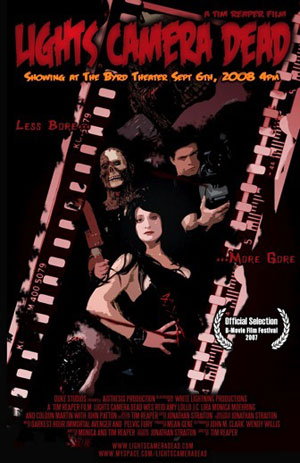 Lights Camera Dead is the tale of die hard filmmaker Ryan Black and ever so pretentious screenwriter Steven Dydimus, who will stop at nothing to complete their self- proclaimed zombie masterpiece “The Music Box.” On production day 666, a fed up cast and crew quit bringing the film to a screaming halt.

I’m a real zombie for movies about “making a horror movie” and this one has a nice twist to the storyline. They do an excellent job of getting your interest with the opening credits (it’s the best opening credit sequence I’ve seen in a long time and that includes big Hollywood movies). You know the story (because, hey maybe you’re living it?), it’s a couple a friends who set out to make a horror movie! I can’t think of anything better. They are plagued with bad audition after bad audition, but eventually they get there cast and crew together (and that’s the easy part… now they have to keep them together). They do a great job of distinguishing the movie they’re making (The Music Box – filmed in black and white) as opposed to the movie YOU’RE watching (Lights Camera Dead – filmed in color).

Ryan (one of the directors) of course casts his girlfriend Kari (kind of looks like Sarah Michelle Geller) in the lead role, and I don’t need to tell you that things go down hill after that. After Kari walks out on the project and the directors find their “feature length film” isn’t long enough, they find “murder” as the answer to all they’re problems! Suddenly, Life imitates Art in a horrific way! This movie kept my attention from beginning til end, and sometimes that is a difficult task when making movies at this level.

Dead Good Job! My favorite line in the movie is, ” Yeah, I’m retarded, wanna ride my short bus “. Ha! I would recommend anyone making their own horror film from ground up to give this movie a look, because it’s nice representation. The movie is a witty and gory good time!

Movie Facts:
Facts about Lights Camera Dead (’cause you can’t make this stuff up)
Number of Days Filming 30
90% between the hours of 8pm and 6am
Total amount of Man Hours Contributed 4,300
Total Number of People Involved with the film at one time or another 150
Total Fog machines 3
Total amount of Tapes used in filming 40
Typical Amount of Takes per Shot 8
Total Feet of Intestines 5
Pints of Blood Made and Spilt in the film 49
Number of Dogs owned by Billy Bain’s Neighbor 50