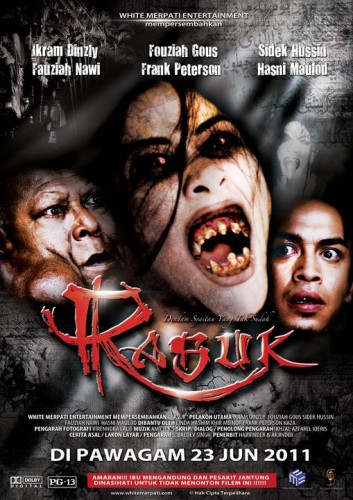 If Malaysia made an exorcism movie, it would probably look a lot like this film. Honestly, I have absolutely no idea what is going on in this film, but according to 24framespersecond.net RASUK is definitely a horror-comedy. Judging by the possessed black tar spewing woman in the trailer, this film is going to be an interesting film.

Synopsis:
Based upon an old Malay myth, it tells the story of Arman and Melati who chose to live in a bungalow built since the Japanese occupation as both of them wanted to live in a peaceful environment without the hustle and bustle of city life. Mysterious things start to occur after Melati accidentally knocks a marked stone in the vicinity of the house and collapses. Melati’s mother, Zaiton came to visit but then passed away unexpectedly, shocking both Arman and Melati. Melati frequently day dreams, but in fact she have been possessed by an evil ghost that wants to exact revenge after being awaken by Melati. Eventually, Arman suspects that Pak Mail is responsible for all the strange occurrences.

Check out more about this film at the Official Website: www.whitemerpati.com/