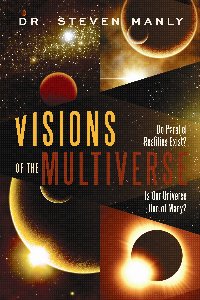 VISIONS OF THE MULTIVERSE

Multiverses, quantum physics, worm holes, time-space…these are no light matter (pun intended). In fact you may have some familiarity with these thru recent films and tv shows that spout out bits and pieces to engage viewers. Well look no further than Steven Manly’s new book by the title of “Visions of the MultIverse.”

I love the way Steven begins his book. He takes your hand and guides you carefully into the regions that would have most doing intellectual somersault in their brains. Don’t worry, this is no Dr. Seuss book either, however for me it’s a subject that intertwines other subjects on one of the most intriguing journey our minds could ever phantom. With a homage beginning that pays tribute to Einstein’s theories and how his thoughts and works plays a part in quantum research, you are taken step by step into realms of time travel, universe and dimensions that could contain carbon copies of yourself in different quantum variations. First, he tells us, flip to the back of the book and read thru the summarized comparison of multi dimension theories…deep huh!

This segues nicely into the content that he has culminated up for us. What is it, when is it, how is it? Well simply it’s a potential solution into thought processing that gives us a journey into the ream lm of fantastical possibilities. Time is discussed and our perception of time from different scenarios. The effect of gravity and the bend of time-space that connects the dots…so to speak.

Content ranges the gamut from Black Holes, to advanced quantum physics theories into basic particles teachings. Readers don’t have to worry too much about this being unreadable as the author assumes his audience will vary in understanding. You can get lost though in the inclusion of “so” many scientific subjects that at times it made it hard for me to remember them all to review the book. Look forward to learning slices of cosmetology, relativity, string theory and the general way of thinking associated with our universe as a flat plain verses an expanding plain. It is also pointed out that our approach to scientific theories is much different today than past assumptions. We have gotten past the idea that quantum is make believe and have embraced it into our mindsets. Now we face the ideas of fully comprehending this in a way that can be taught, explained and broken into new grounds.

“Visions of the Multiverse” is unique in that its not a total theorizing investigation in just multi verses themselves. It is in fact more closer to a personal teaching session about all the things that have been theorized, comprised and formulated thru the years ultimately leading to the subject of focus. Steven Manly provides rich but very easy to read analyses of all things universe, quantum and scientific related on this intriguing subject matter. I will admit, not being a science major or having alot of training in this area that it opened up new concepts that I wasn’t familiar with. This opening up as I’m calling it is presented in simple examples or studies that make it that much more consumable,

My impression coming into this just as a book reviewer and curiosity seeker, is that this book provides a perfect simpler introduction into physics for students who ant to see what they will be getting into. I would go even further to say that most readers should own this book only to refer to as often as you can to open you minds into scientific principles. It’s interesting stuff and perhaps better taken in a chapters rather than a full front to back. I plan on revisiting this book many time sin the future as I begin to absorb some of these concepts. In summary, its’ time we all start thinking outside of the box a bit about things that may prove to be part of our existence moving forward. Fantastic!