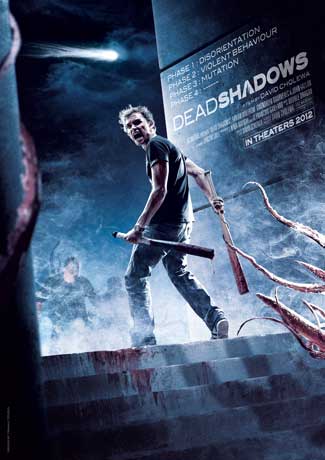 Dead Shadows tells the terrifying story about a young man, Chris, whose parents were brutally killed 11 years ago, on the same day that the comet of haley could be seen from earth. Tonight, a new comet is going to appear and everyone in his building are getting ready for a party to celebrate the event. There’s even an apocalypse theory going around. As the night falls, Chris starts to discover that people are acting strange – and it seems to somehow be connected to the comet. People are becoming disoriented and violent and it doesn’t take long before they start mutating into something from beyond this world. In a fight for survival, Chris has to try to escape from his building with the help from some other tenants – but will they make it out alive?

“With DEAD SHADOWS , producer and director David Cholewa wants to redefine the creature horror genre with lots of action. By taking what the French are well-known for in the horror genre and going back to the old 80’s vibes and elevating it to the next level, we want to create a film that is fun, suspenseful, full of action and very scary.”

DC MEDIAS will start selling the film during the 2011 Cannes market.

Shot with the RED MYSTERIUM X , principal photography started in April and will finish in July for completion at the end of 2011 and a French Theatrical release in 2012