The Black Saint was lucky enough to be in attendance last night for an evening of horror shorts. All of them either written, produced or directed by Latinos. Subtitled “Cinco De Miedo (a nice take on Cinco De Mayo), The event was held at the Anthology Film Archives on the lower East side of Manhattan & featured a nice selection of shorts followed by a feature. The whole event was put together by Edwin Pagan of Latinhorror.com (The official home of Latin horrorphiles everywhere)! If you’re not in the know, Latinhorror.com is dedicated to the genre of Latin horror and features the leading Latin/Spanish/International “dark creative expressionists” working in film, theater, music, photography, illustration, graphic novels, “dark art” novelas, comic books, literature, and games—from the seasoned masters—to the up-and-coming Latin horrorphile whose work is grounded in horror, the macabre, and gothic arts. It is well worth your while to check it out at your earliest convenience. Why, because I told you so! I will be sitting down with Edwin soon for an extended interview to find out what plans he has for the site & what he’s up to in the genre as well.

But for now, I’m going to focus on the program that I saw last night. The first short of the evening shown was called “The Devil’s Toy”. Directed by Alex Lugones, “The Devil’s Toy” is the story of two boys who are about to open a Jack In The Box toy that was recovered by one of the boy’s grandfather in WW II. It was recovered at a Nazi concentration camp during a raid by Allied forces. Unfortunately it was sitting in the center of a pentagram when it was found..that, my friends, can never be good. As one of the boys recounts the history of the toy, we are treated to a extended flashback of how it was recovered, how it could not be gotten rid of & the power within it. Of course, the youngsters end up opening the cursed box. Much to their chagrin…

“The Devil’s Toy” was a great short to open the festival with. It was intriguing & mysterious. It also touched upon the whole “Nazi Witchcraft” legend put forth by many in the past. That legend recounts that the Nazi’s actually experimented with the dark arts in order to vanquish their enemies but ultimately failed. It is well acted & written as well & doesn’t shy away from the red stuff, which I usually don’t see too much in shorts. You can catch the trailer for it here: www.youtube.com/watch?v=KPoJu9LmEqg.

The second short of the evening was Yahaira Paulino’s “Bienvenido A Casa” (Welcome Home). I actually saw this one last year at the NYC Horror Film Festival & it still packs a punch. A young woman (Paulino) returns to her mother’s home in the Dominican Republic to get closer to her roots but finds that all is not as it seems once she arrives. It’s a ghost story that is effectively spine chilling. The audience was really into this one as well. They laughed & screamed in all the right places & it had to be gratifying to Ms. Paulino to hear an audience react the way this audience did to her work. She not only directed & starred in it but she also wrote & produced it as well. A true Renaissance woman! The trailer can be seen on Facebook at this link: www.facebook.com/video/video.php?v=448175057441. Check it out!

My favorite short of the evening came directly after “Welcome Home”. Simply titled “Mama”, it tells the very brief (3 minutes) tale of two young girls who must leave their home when someone “Unpleasant” comes in. More of a scene to attract investors for a full fledged feature than a short, “Mama” not only was the scariest short of the evening but it was also the scariest three minutes I’ve had to endure in a long time! If this is indicative of what the feature is going to be like then color me anxious!! Director Andres Muschietti has created something of a small miracle here. Three minutes that are scarier than most full fledged 90 min features. The good news is that Guillermo DelToro has attached himself to the project as a producer & there is a feature in the works. The even BETTER news is that you can see the short here: www.slashfilm.com/guillermo-del-toro-mentoring-muschiettis-mama/. Watch it in the dark, you WILL be scared..

Next up was Leonardo Rodriguez’ “sHELL“. Which tells the tale of Simon, whose lover was murdered. Unfortunately she was married & her husband is grieving her loss as well. In addition, he knows all about his wife’s infidelities with Simon & has no sympathy for him. Simon’s life has come to a crashing halt while he’s in mourning when a seashell that they had collected together begins to speak to him & it whispers “Murder”! Now Simon has to find the killer no matter what the cost before he becomes the next victim. “sHell” has a nice little storyline that reminded me of an Italian Giallo film but unfortunately some so-so acting made it less than it should’ve been for me. But the story potential is evident & it is well choreographed by Rodriguez. A teaser for the film can be seen here:

Rafael DeLeon Jr’s “Waffle” was up next. “Waffle” tells the story of a science fair champion who invites a friend over for dinner.www.youtube.com/watch?v=cju4T33p5xg Disfigured science fair champion Wendy seems to have found a new, trustworthy friend in schoolmate Dana. Wendy even takes the step of inviting the girl to her house for dinner, despite being embarrassed by her proud mother. However, when Dana shows her ugly side, Wendy’s natural reaction is to do the same. Petty jealousy and competitiveness are not welcome in her household. I was intrigued by the story & was curious as to where the whole thing was headed. When we got to the ending, suffice it to say that I was supremely satisfied. It’s an especially brutal little short that garnered laughs & gasps from the audience in equal helpings. A teaser for the film can be seen here: vimeo.com/13809620. Another one to catch if you can.

The shorts program ended with “Le Miroir” (The Mirror), directed by Sebastien Rossignol. It tells the story of a movie star who is disfigured in a car accident & the subsequent surgery she undergoes to restore her beauty. In an attempt to escape the media & recuperate, she returns to her childhood home where she finds herself haunted by the past…& challenged by her future. It’s a nice little piece that while a bit shopworn script wise, is still effective in the end. The story has been seen before but Rossignol’ TLC is evident in every frame of the short. It’s beautiful to look at & very well acted. An interview with Rossignol along with some scenes from the film can be seen here: www.youtube.com/watch?v=cju4T33p5xg.

The feature film was to be Jaime Balaguero’s “Fragile”, starring Calista Flockhart as a nurse trying to protect her patients from a rash of attacks. Unfortunately, there was an issue with the film & it could not be screened. Much to my regret. But that didn’t hamper what was an OUTSTANDING evening’s worth of excellent horror shorts! The audience was pleased & there was a nice Q & A session with the directors in attendance afterwards. All in all, a very nice evening. The Black Saint met some new friends, enlisted a few more acolytes into his dark army & had himself a fine time. I cannot wait for the next program from Mr. Pagan & Latinhorror.com. Don’t forget to check out the links posted above & latinhorror.com as well, both are well worth your time. 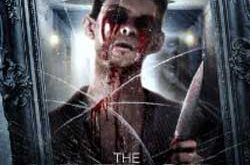 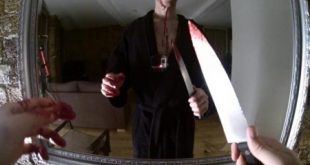