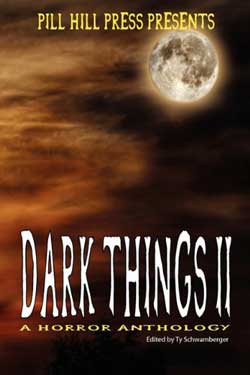 Dark Things II edited by Ty Schwamberger is yet another well put together anthology from Pill Hill Press. After reading the first of the Dark Things books I was very excited to get a chance to read another. Once again we have a very different assortment of stories from demons and angels to ghosts and zombies, this collection has it all.

“You’re Gonna Die” by Derek Muk is a classic story of good versus the ultimate evil. This is a story about an insecure nun on a quest to find purpose in her life; in the process she stumbles upon a startling secret with terrifying repercussions. This story is very well written and an interesting opener to the rest of the book.

“Death Twitches” by Indy McDaniel is about a tough Goth girl and her vile hatred of spiders. This hatred is understandable once she reveals a chilling story from her childhood. Unfortunately, her hatred and desecration of spiders may come back to haunt her. This is not a story for those that are squeamish when it comes to spiders as it may just give you nightmares.

“The Weeper” by Tim Lewis is about a trio of investigators, a rookie included, who scope out an abandoned office building for a weeper, a mesmerizing she-beast. Although, the rookie is given fair warning he’ll learn firsthand just how terrifying and deadly this creature can be. This story is creepy and gripping, keeping you on the edge of your seat.

“The Devil’s Footprints” by Jack Horne is about a village in the middle of a snowy winter where some very menacing tracks appear in the snow. A young boy goes ventures into the cold to find a little more out about the footprints supposedly left by the Devil. This is a pretty accurate representation of how small communities explain away unusual situations because of their fear of the unknown; their denial keeps them from seeing what is really out there.

“Polarity” by David W. Landrum is a story about a hooker who takes on a client with a fondness for the occult. The hooker is drawn into a very sinister situation which may have devastating consequences. This is a great story about innocence, evil, and redemption.

“R.F.” by Mel Clayton is about a photographer who goes out to an old mill to take pictures and speaks with the groundskeeper there. The photographer gets a little more than he bargained for as these grounds are not only the scene of a murder but also the residence of some ghostly inhabitants. This is one of those ghost stories that someone’s brother’s, friend’s, cousin said has happened to them…one of those creepy stories you might hear while sitting in a dark forest next to a roaring campfire; these stories are always a favorite of mine.

“The Old Man of Weevil Creek” by Adrian Ludens is a story about a trio of drunk and mean brothers in the swampy backwoods who go looking for a creepy old hermit and his gold, but they never return. After their disappearance the brothers’ little sister goes back to the hermit’s place to find out what happened to them, soon she sees something that will haunt her forever. The setting of this story adds to the creepiness of the plot; this will definitely keep readers from venturing too far out into the swampland at night.

“Doll’s House” by Lisa J. Marcado is about two sisters who inherit the house of a recently deceased aunt, one which they barely knew they had. While one sister is very opposed to setting foot in the old house the other is ready to check out the newly acquired inheritance. This house, however, carries a deep, dark secret which the girls will wish they hadn’t discovered. This story is a menacing and suspenseful tale with an excellent and memorable ending.

“A Strange Turn of Events” by John Grover is a story about a gay, promiscuous man who, on the way back from one of his lover’s houses, nearly crashes into an abandoned SUV. He soon finds the driver of the vehicle and the maniac in pursuit of the SUV’s owner. This plot is full of interesting twists and turns which sets the tone for a darkly humorous horror story.

“The Chevalier Sisters: A Tale of Voo Doo” by C.J. Sully is about two sisters aptly named after the mythical beings Medusa and Athena. The sisters are polar opposites, one beautiful with venom running through her veins and the other a crippled “not-so-attractive” girl with a heart of gold. Soon the girls’ personalities will play into their fates as they come across a powerful Voo Doo clan. This is a great story that I can only compare to an adult R.L. Stine work, with its interesting female characters and macabre tone.

“–Rot–Rot–Rot–” by A.J. French is an eerie tale about two Wal-Mart employees who happen upon a strange vagrant wandering down one of the aisles. The vagrant is muttering something under his breath and is, seemingly, in a trance. There is something indeed strange about the man and things get even weirder as the story progresses. This story is short but effectively creepy with just a hint of gore.

“Now Playing” by George Wilhite is about a young guy who, after a long night of partying on Halloween of 1980, wakes up in a very odd place. His night seems to get even weirder as he finds out a few things have changed since the party; he doesn’t quite know what to make these things at first. This story is very interesting and I felt that I could picture everything that was happening throughout. My warped mind even found it a bit humorous, darkly humorous, of course.

“Bug Boy” by Matt Kurtz is a story I think we can all relate to just a bit; it’s about a weird boy who collects and then destroys bugs. He’s the kind of kid that all the other kids are creeped out by and who everyone is afraid will one day go on a maniacal killing spree; I think we all knew one of those kids in school. This kid, however, takes his bug hunting a little too far and gets into a very tight spot. This is the kind of story Stephen King would write if he weren’t too busy rambling to get to the point, in other words I loved it!

“Dummies” by Sean Graham is about a backwoods town with a scary secret and some very deadly intentions. Any and all vacationers who wander too close will soon become part of the town’s population, in a very strange way. This story is very unique, the plot is very compelling, and it is an interesting read.

“The Interview Nobody Wants” by Scott M. Sandridge is about a reporter who takes on an interview with a very secretive individual. Soon the reporter learns that this interview is more than it seems. Though it is short, this story is very twisted and creepy; the bizarre ending is well worth the read.

“Delicious Morsels” by Piper Morgan is about the menacing darkness that lurks in the closet of a child’s room. What’s inside that darkness is sinister and is waiting patiently for its next meal. This is the kind of story that will make you want to close the closet door, lock it, and then nail it shut.

“The Welcoming” by Shane McKenzie is a gory tale about a boy who wakes up locked in a dark room, not knowing how he got there. The boy soon realizes that he is not the first person to wake up befuddled in this strange place as body parts decorate the floor. He knows he must escape and must take any chance he can get. This story is intense, gruesome, and very bizarre…three things that make horror stories great!

“Doubt” by Matthue Roth is about a hypochondriac who keeps bugging his doctor and insisting he has a severe medical issue. Is this man just nuts, or is there really something wrong with him? This story reminds me of something you would see on The Twilight Zone or Tales from the Darkside; it is a story with an eerie plot and a great ending.

“J.P. Gilman” by Adam P. Lewis is a tale about a girl who responds to a carnival advertisement for an assistant job. She soon learns that the employer is not only a large, disgusting, pig of a man but also performs a very strange act in his show; the girl quickly realizes she no longer wants the job nor does she want to take part in the very bizarre act. This story was entertaining as well as a bit gruesome, which is always a major plus.

“Cutting Class” by Thomas A. Erb is about a wimpy kid who is constantly being pushed around by several fellow students as well as the school’s gym teacher. The day of the physical fitness test the boy has to make a decision to either stand up for himself or fade into the background. This is a great story and all too realistic in today’s society.

“Yesterday’s Sins” by Joseph Mulak is about a man who visits with an old friend-turned-priest. The priest has something very unique locked up in his basement, something that will change the lives of the two men forever. I liked the uniqueness of this story; the idea is very different and the characters very complex.

“Pale in the Night” by Kurt M. Criscione is a story about a woman who wakes up in a small, make-shift cell, in pain and unsure of the events leading up to her waking. She finds out that she is not alone in the building, not only are there more victims but also a hulking mass of a being keeping watch. She must find a way out without ending up like the other victims of the creature. This is a good one to go out on, without frills and with a good cat and mouse chase, this is an intense thrill ride to the very last word.

Each of these stories has something to offer the horror population. This collection is another great read that I would highly recommend!