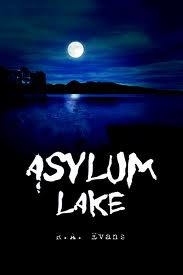 I could be wrong (it’s usually the case), but I believe this is the author’s debut novel. It certainly bodes well for the future. Asylum Lake is a good old-fashioned horror novel – accessible, creepy and eminently readable. It tells of a writer, Brady Tanner, returning to his home-town of Bedlam Falls. (Bedlam, in case you don’t know, was a notorious Victorian asylum in England, wherein the mentally ill were abused and put on display for the fine Victorian ladies and gentlemen to come and gawp at.) Brady’s recovering from the loss of his wife at a young age and is trying to pick up the pieces of his life. Well he’s come to the wrong place.

Bedlam Falls is a town that’s witnessed some terrible events over the years. And over it all looms the spectre of the eponymous asylum. We get to learn more about the gruesome incidents that have beset the town by way of flashback – a device that could have become overly complicated in less skilled hands. As it is, we’re pulled seamlessly into the narrative, related through generations of the Tanner family, all of who have been consumed, in one way or another, by the town’s sinister secrets. As we go back in time, and the story slowly builds up a head of steam, we learn why the asylum and its denizens continue to cast a shadow over the town. And why Brady Tanner is now being targeted by a sinister supernatural force.

The novel combines classic, creepy chills – such as a Scrabble board with distinct Ouija tendencies – and a generous helping of gore. One particular scene springs to mind, redolent of the opening scene in Halloween. Just think garden shears, hedge trimmers, knives and buckets of blood and you’ll get the idea. If I had a criticism, I’d say the narrative occasionally meanders away from the events you really want to learn about. But that would be disingenuous to a book that I was happy to take to my bed every night. I believe a sequel is in the offing too, so I can only imagine there are many more out there like me, who enjoyed this book. I look forward to seeing the dark waters of Asylum Lake ripple once more. Four Black Stars.