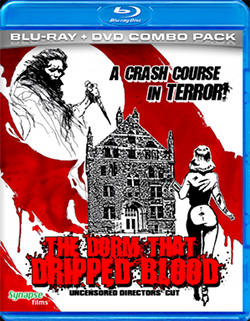 On the eve of Christmas vacation, a college dormitory stands condemned… the dark halls now vacant, and unsafe. Student Joanne Murray and her close friends volunteer to help close down the building, unaware a psychopathic lunatic is hiding in the shadows. As the students disappear one by one, Joanne discovers the horrifying reality that if she is to survive, she alone will have to find a way to slay the brutal murderer.

Synapse has found themselves a gem of 80’s slasher fare and as only they can have brought it to the fans in a a great little package.

A 2 disc Blu-ray/DVD combo this presentation of THE DORM THAT DRIPPED BLOOD may just be the Blu-ray release of the year for this horror fan.

Presented for the first time ever in its complete, uncut form THE DORM THAT DRIPPED BLOOD is must watch fun for any true fan of the original slasher craze. While certainly borrowing from all the other horror films of that era DORM manages to stand out from the crowd because of the feeling of high tension that directors Jeffery Obrow and Stephen Carpenter manage to infuse into their low budget endeavor.

Originally titled DEATH DORM the film tells the tale of a group of college co-eds who stay on campus as Christmas vacation begins to help close down their dorm that has been condemned and is being closed down. The group finds themselves stalked by a serial killer who hunting them down in the darkened halls using a variety of tools, utensils and implements.

Brutal and uncompromising DORM attempts to take things to the “next level” in blood and violence and does manage to be quite inventive with the kills. FX artist Matthew Mungle does a great job with the gooey stuff and the gore effects certainly stand the test of time still managing to shock some 30 years later.

I love these old films with that commando feel, you can tell they were filmed by kids just out of film school with hopes of making the most notorious, blood filled film ever. Listening to the highly entertaining and very well done directors commentary you definitely realize that was the case with DORM and Obrow and Carpenter do a great job of engaging you and holding your interest as they discussing the making of their blood soaked masterpiece.

Red Shirt Pictures handled the special features end of things for this disc and horror fan extraordinaire Michael Felsher does his usual A+ job on the two featurettes that round out the disc. One segment goes in depth with FX creator Matthew Mungle as they discus the blood and guts of the film. The other segment talks with composer Christoper Young and is highly informative and entertaining. Red Shirts’ work greatly enhances the presentation and defiantly propels this disc into “must own” territory.

Synapse also has includes (which I love) the reversible cover art that allows you to see the alternate cover art. For DORM it features the PRANKS cover which most of us who came of age at the time will remember from seeing it on the shelf at the Mom and Pop video store back in the day.

THE DORM THAT DRIPPED BLOOD is a little piece of slasher royalty and SYNAPSE gives it the respect it deserves and as such offers fans what just may be the first truly “must own” title of the year.

If you think you’ve seen this film totally uncut…think again! Synapse Films is proud to present THE DORM THAT DRIPPED BLOOD in a never-before-seen alternate version containing additional scenes, extended gore sequences and a different sound mix. This transfer was created from the only existing 35mm answer print of the original “Directors’ Cut” entitled DEATH DORM, a version of the film thought to have been lost for over thirty years.

As most of you know, I’m not much into the “technical” end of these discs but I’ve heard a lot of bitching about the transfer on DORM. Just want you to know that for me, I thought it looked fine. The picture is clear and it sounded great. The awesome score from Young really stands out. It’s possible that “technically” there could be an issue but for the just plain old fan, it’s nothing that is noticeable or that distracts from the film. Don’t listen to the haters, you want this one.