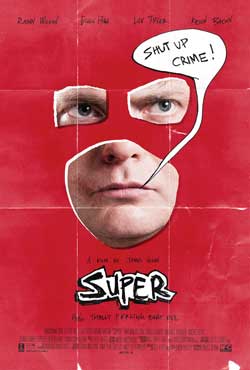 After his wife falls under the influence of a drug dealer, an everyday guy transforms himself into Crimson Bolt, a superhero with the best intentions, though he lacks for heroic skills.

Every once in awhile you come across a film, that falls into that “dude, this is one you gotta see’ films. Needless to say, I was really impressed by those catch me by surprise indy film directed and written by James Gunn. What makes “Super” so super is that it catches you by surprise with a assumed derivative “Kickass (film)” flavor, however its turns out to be quite mouthful more.

Starring the lovely Ellan Page and Liv Tyler, this film is heralded by one outstanding performance of or own office nut Rainn Wilson. Rainn really has a chance to shine and show off a bit as Frank D’Arbo, a man who has very few memories of special events in his life. His wife, Sarah Helgeland (Liv Tyler) is his inspiration and a bit too beautiful to be with a simple down and out local diner cook. Even with his few fond memories he has always sensed that the union might be fleeting and on the brink of destruction due to her past drug problems. Enter in Kevin Bacon, local drug lord, smart ass bad man Jacques who tries his bets to be charming but still exudes a sense of evil and cruelness. His lackeys Abe (Michael Rooker ) and friends make sure that Jacques stay well protected and supported for that matter.

When Sarah leaves Frank to this drug peddling thug, Frank has a hard time admitting that she simply left him without being coerced. This felling becomes obsession to the point of Frank being literally touched by the hand of God after viewing local Christian superhero shows and inspired to become “The Crimson Bolt”. The Crimson Bolt is Frank’s attempt at delaying with the issues by fighting local crime. His efforts are fueled by local comic book store clerk named Libby (Ellan Page)

As The Crimson Bolt starts making headlines as a local crime fighter, Libby begins to suspect that Frank is one in the same. The 2 hit it off and become a duo of sorts with Libby as the sidekick Boltie.

Now in summary all sounds alot like a few films you MAY have seem before. Perhaps another dark comedy hero flick where the fed up citizen takes the law back into his own hands….perhaps.

What is truly special about this film is that its quirkiness is greatly enhanced with some really cool and absurd special effects moments woven nicely into the storyline. Ellan looking rather hot in her superhero get up is quite the seducer adding a heightened level of sexual encounters to the mix. Though where this film really shines is that it manages to somehow be a horror film in some aspects. The Crimson Bolt, whacks folks over the head with a pipe wrench splitting there heads open, Libby garnishes some makeshift wolverine claws and the to of them add some homemade pipe bombs to the fun while blowing folks into pieces.

It’s all rather shocking at times, mainly because you weren’t expecting the “cross the line” experiences. I wont spoil all the moments for you, you’ll have to watch it for yourself, however we are giving this a high recommendation and entering it into our cult film section as a one to see. The film is rich with top name actors and manages to keep itself moving by an engaging story line. If you can believe it even manages to do so in bloody horrifics and a touch of quaint, cute and warmhearted (at times) Kevin Bacon brings a welcome touch of sarcasm and nastiness that really works for his character played villain. Rainn in his own personal Rainn way is stern, emotional , determined and bold all wrapped up in one.