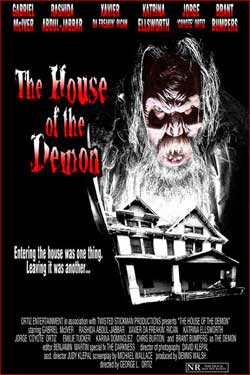 With a ban on campus Halloween parties, Charlie (Gabriel McIver) throws a spooky bash for his college classmates at the abandoned house he’s inherited. But as night falls and partiers arrive, flesh-eating demons come alive. Now, the chance of escape may be as remote as the haunted house itself. Rashida Abdul-Jabbar, Katrina Ellsworth and Brant Bumpers also star in this film festival horror selection.

I once had a giant abscess in between my lung and ribcage that required a hole be drilled in my back and drained slowly with a catheter. Sitting through George L. Ortiz’s THE HOUSE OF THE DEMON was nearly as painful. If the impossibly large creature from Stephen King’s THE MIST were male, this film would suck its balls. All 85 agonizing minutes seem like a glorified high school student film; complete with blown out lighting, shots that are occasionally out of focus, little to no color correction, bad audio and improperly white balanced footage. Granted, the film had a miniscule budget of only $35,000 but that is no excuse for a grotesquely amateur looking production.

It’s Halloween and Charlie (played by newcomer Gabriel McIver) and his six friends refuse to let their college’s ban on campus parties spoil the best night of the year. Charlie has recently inherited his eccentric uncle’s abandoned house on the outskirts of town. So, Charlie and his buddies pack up the beer and weed and head over to THE HOUSE OF THE DEMON for a night of good, old fashion debauchery.

In a shocking twist that I must admit I did not see coming, the house is haunted by a demon—summoned during an ancient pagan ritual performed twenty years ago by Charlie’s crazy uncle. You can tell which one is the demon because he is the one wearing the spooky makeup that looks like a bad Halloween mask. One by one, the demon possesses Charlie’s friends and forces into him into a final confrontation where, if the night had not gone bad enough all ready, the demon divulges the bizarre sexual behavior of Charlie’s mother—now, that’s cold! Charlie finds his uncle’s old spell book and conjures up a spell that slays the demon.

First timers George L. Ortiz and screenwriter Michael Wallace made a tragic mistake by taking this film into the supernatural arena. With a virtually nonexistent budget you just do not have the luxury of proper visual and makeup effects. They should have just kept it simple and followed the path that made John Carpenter’s HALLOWEEN such a huge success. A man with a knife and a plain white mask is all you need to manufacture fear. The demon is just not scary and looks too lame to be funny. THE HOUSE OF THE DEMON is marketed as a horror/comedy but there was too much focus on the horror and not
enough on the comedy. Ortiz recognizes this by adding a Mystery Science Theater 3000 type commentary and one funny scene where the movie accidentally goes into SAP mode and the actors speak in Spanish for several minutes.

That was pretty funny but the movie needed more of it—more jokes poking fun at the lousy production values and more of the creative stunts that you can get away with in a B-movie. The only redeeming quality in THE HOUSE OF THE DEMON was the opening and closing credit sequences, which look “professionally” done. The film features reasonably good-looking actresses in moderately sexy Halloween costumes and you can find an “obligatory tit shot” here and there. I also liked the beat to the self-titled theme song in the end credits. The house itself was a rather good choice. It did have a very natural “haunted” look to it, enough to keep squatters away—that’s for sure.

Other than that and the occasional funny line, there is nothing here that I can personally recommend. I do, however, admire the dedication of executive producer/director George L. Ortiz. It takes a man with big cojones to reach into your own pockets and risk your own financial well being to follow your dream. Good filmmaking takes years of practice and a wealth of experience. It is truly a team effort and you are only ever as good as your cast and crew.