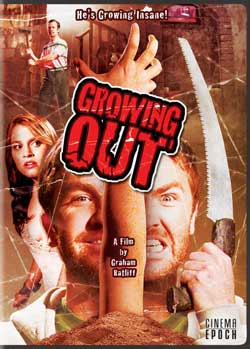 After moving into a decrepit house, struggling songwriter Tom (Michael Hampton) finds an unlikely roommate in the form of a live human hand sprouting from his basement floor. As the mysterious growth continues to evolve, so does its relationship with Tom, who’s also busy falling in love with his neighbor’s girlfriend, Veronica (Devon Iott). Dark comedy, horror and musical numbers intermingle with spine-tingling glee in this warped indie film.

Growing Out is an odd little movie with a lot going on, but don’t get me wrong, I mean odd in the best way possible, it’s the kind of odd that will keep you interested throughout the film. Tom (Michael Hampton) is a struggling musician that regularly performs at a coffee shop that also hosts an open mic stage. The film opens with Tom performing an acoustic set on the coffee shop’s small stage. He finishes his song but receives no applause from the indifferent audience. He is then approached by the coffee shop’s manager (Bill Devlin) who suggests that Tom give up the whole music thing and no longer perform at the shop’s open mic.

During his walk home he happens upon an old house that reminds him of his grandmother’s, but what really catches his attention is Vernon, (Ben Bowden) a one handed man singing and playing a guitar and a sign that offers free room and board. After a brief conversation, Tom offers to become the new caretaker of the house. Soon after settling in, he discovers a human hand sticking out of the basement floor like a plant. Things become even stranger when, the very next day, Tom finds that the hand has grown into an entire arm. Eventually, after some watering of course, the limb grows into Archie (Ryan Sterling, also credited as ‘The Growth’). The ensuing scenes between Tom and Archie start out as comedic exchanges but, as the film progresses, their conversations start to become very touching and emotional as Tom uses his new friend as a target to vent his mounting frustrations.

Throughout the film, Tom is busy with cleaning up the old, two story house, caring for Archie, writing songs, making pastrami sandwiches for Vernon’s Aunt, who spends the majority of the film shut up in her upstairs bedroom and developing a romantic relationship with Veronica (Devon Lott), a fellow musician and the girlfriend of Philip (Chase Hemphill), a man who has taken up residence in a trailer that sits in the back yard of the house.

What really kept me interested throughout the film was not the storyline itself, but the characters who populated it. Each actor performed their roles up to par, and breathed life into the well written, but sometimes awkward, dialogue. The only thing that I can say that bothered me about the characters was Tom’s initial lack of charisma, but I guess that’s to be expected of struggling artists. However, I was please to see Tom’s demeanor change throughout the movie; He’s a good example of a dynamic character.

Music was one of the major elements that assisted the film’s narritive. The tone and subject matter of Tom’s songs change throughout the film to match his emotional state. Although, I thought most of the music was used fairly well in several sequences, it bothered me to see that Tom’s lip syncing didn’t quite match the audio during one of the film’s pivotal scenes. Also, we see Tom singing and strumming his guitar but we can also hear a drum track and an additional guitar accompanying him, even though a drum set and a second guitar is no where to be seen. I honestly don’t consider this to be a flaw that affects the quality of the film too much, but I’ve seen this little slip-up occur in several other movies and always found it to be kind of funny. Overall, I believe writer and director, Graham Ratliff has created a film that defiantly has all of the makings of a cult classic.

I wouldn’t consider it an all out horror film, but rather a comedy with some subtle horror elements (including a bit of slapstick that reminded me of Evil Dead 2). It was very reminiscent of Rodger Corman’s Little Shop of Horrors. Growing Out’s real bread and butter is found in the charming characters and quirky dialogue. Original, but not exactly groundbreaking, Growing Out is an enjoyable, little indie gem that is certainly worth a viewing.