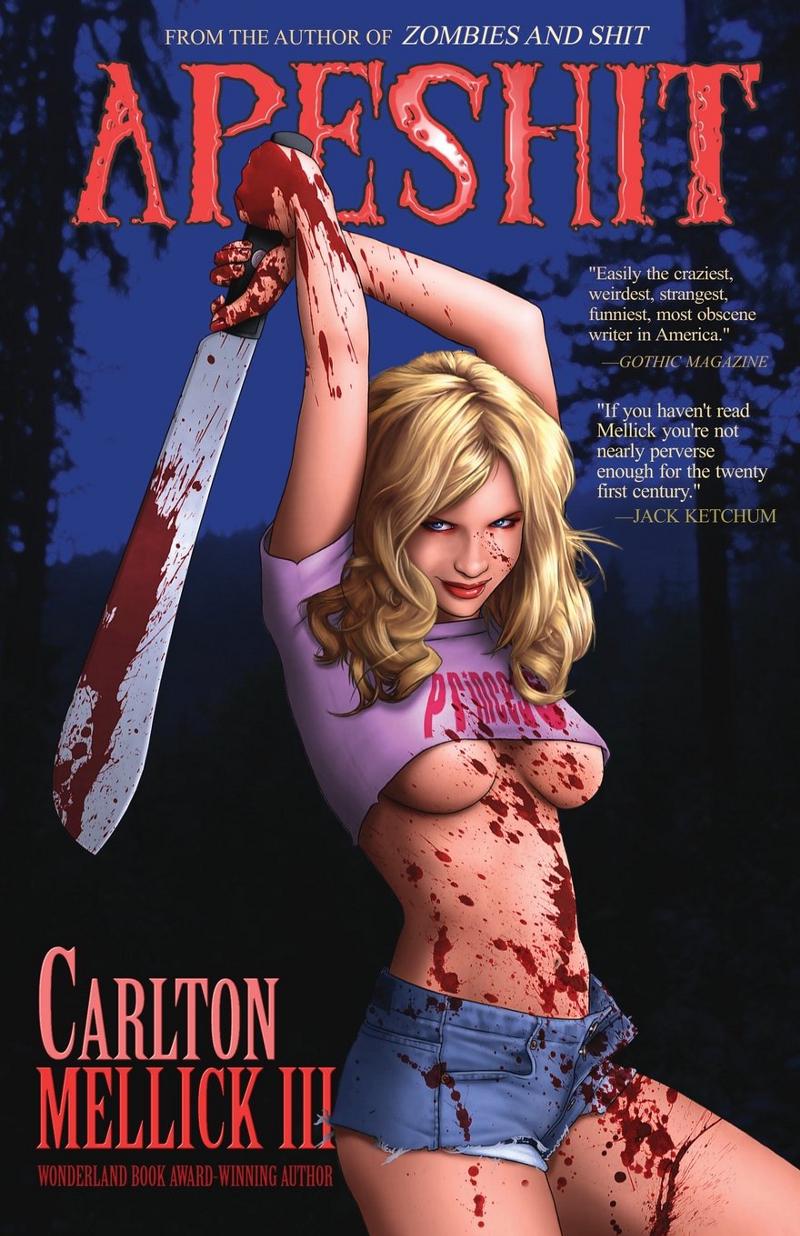 The title says it all. Apesh*t! A book written by the master of Bizarro Fiction, Carlton Mellick. This is the author’s little homage to the 70’s and 80’s slasher in the woods type story. We all know the formula a little too intimately. A group of horny teenagers go into the woods and one by one they get hacked up by some deranged lunatic who has a fondness of well, hacking people up. It’s what they do. Apesh*t falls into that category but, there’s strange sh*t going on in the book. You see, just like in the movies there’s something that has a hard time staying dead. No matter what the characters do, this killer keeps on coming. Carlton’s writing style is crisp and clear and very tight.

The characterizations of the characters in the story is what you’d expect there to be in a slasher movie. You don’t like them! Only one person you like and you can relate too, the lone survivor. The final girl. You root for her and hope nothing bad happens to her. You watch the carnage unfold and what the hell happened next?

The gross out factor is high in this. If you have a weak stomach, do yourself a favor and read this book. I always wanted to see that happen, having someone read a bizarro novel where he and she is grossed out that they vomit all over the floor. That would be one hell of a sight to see. So much horror and repulsion goes on in this book where you have to stop and wonder what the f*ck is wrong with the writer of this novel?

Note, this is all good what I’m saying about the novel. I would love to see a sequel if one permits it. This is the first novel of Carlton’s that I’ve read and had the pleasure reviewing. This book goes right up there with The Bighead by Edward Lee. That’s how damn intense Apesh*t is. To say that is a lot. If you don’t know what Bizarro fiction is, Google it. If you even think you may or may not like this, do yourself a favor and read the book. You won’t know until after you’re done reading.

I hear of people closing the book halfway through because they don’t like it. Don’t be like those people. Just because the first part sucks, doesn’t mean the rest of the book is going to suck. I’ve done the same thing and I’ve went ahead and finished it. I was glad I did. I was surprised at how the book turned out in the end.

Read Apesh*t and have a pail ready to puke in!