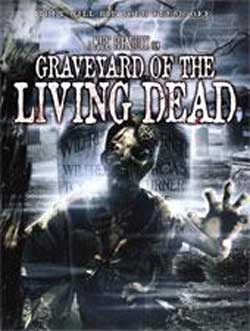 The scientists of a medical laboratory in Germany, Paul (Alexander Reckert) and his colleague Henry (Lars Rohnstock) are researching on their own risk for a secret project. They try to reactivate the brain waves of a recently died human to collect information about the function of the human brain after its death. They are successful but with fatal results! The death body returns to live as an undead…

The situation escalates after the infected blood of the zombies contaminates the soil of a graveyard where a whole school class was recently buried after an awful accident with their school bus. For a group of Gothic-Fans a fight for their lives begins…

Alas the horror genre has become somewhat of a zombie world. This is the portion where I go into the speech about what is it that keeps folks coming back fro more and more zombie lore and flesh eating. Though in essence, I think filmmakers find the attraction with a basically simple concept of humans turning into nonhuman or maybe it’s the fascination with life after death becoming life. Well seeing that there is no shortage of these things it comes down to a few basic principles. How good are the FX, what’s the story and how does the situation play out? 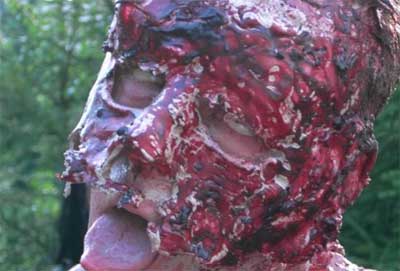 “Graveyard of the Living Dead” is the latest gorefest on my plate tonight and “gorefest” it is! This one though actually comes from Germany complete with German dialog and actors (subtitled). I’m part German, so maybe I’m a little in favor of some new German gore to check out. In any case, the set up is pretty simple. A group of 7 kids….Andy, Tom, Norman, Rick David, Lisa & Jenny are on there way to check out a graveyard and party. If I left someone out, I apologize …I thought I counted 7. The idea of kids, graveyards and zombies isn’t new …….though these filmmakers were bold and actually filmed the whole thing in the day. What doe that mean? That means the gore really has to sell …and sell it does. 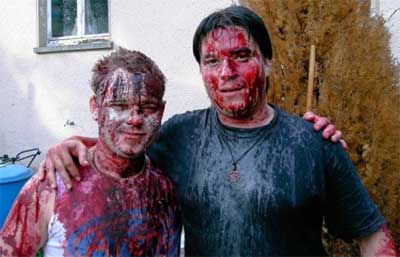 To give you a quick setup of the situation, here is what I gathered. A local medical institute has been experimenting with the 6-12 minute theory. The theory is that after a person dies, there brain still is active for 6-12 minutes. Local scientists Paul and Henry are developing a serum that keeps the brain waves active so they can study the brain better during those minutes. Reason comes in the form of the brain waves decrease and get weaker thus preventing an accurate reading. The goal is to filter data better to study the brain in those mintues…cool eh? Well ….things go wrong of course and upon injecting a subject it begins the whole zombie chaos. Works for me.

Back to the party… Well as you can guess, the zombie virus spreads and starts a chain reaction of a few getting loose to chew on one of the kids. This also starts a chain reaction while the blood seeps into the ground and awakens more dead folks. The remaining huddle up in a nearby tool shed to plan their attack / escape. Now we get to the good part of the review. The filmmakers spared no expense on leg chomping, arm ripping, head biting, stomach exploding, blood flowing, and ear biting gore splatter.

With the scenes being filmed in the day, it presented an additional challenge of really showing all this in vibrant reds and detail. Well the blood supply is enormous as jets spray, pulsate and gush covering everything in sight with neon goopy blood mix. The kids don’t waste time chopping bodies and hacking limbs into glorious gore hound splendor. Really the brunt of this film involves hacking zombies to death, pushing out there insides, sorting thru the intestinal tracts and wearing alot of it in the process. 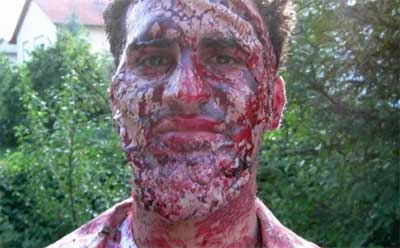 Now while the gore is plentiful in this film, the zombies themselves have sort of a different thing going on. The face makeup sort of looks like plaster and silly puddy covering there faces with blood laid on top. so it blends a little odd with the the actual skin tones. This of course is more enhanced being that they are in direct sunlight. The story itself doesn’t have a ton going on besides bickering in the shed and planning an escape. 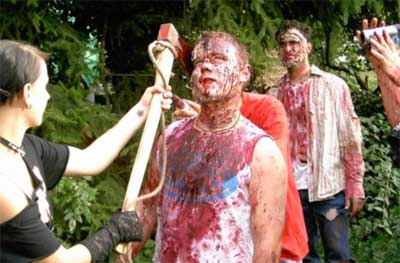 Though zombie fans on the most part I believe are satisfied as long as the killing is good. The film is directed & written by Marc Rohnstock which is actually his first directing job. Which I’m gonna say is impressive with that fact alone and that this film translates better than several zombie films I’ve seen as of late. The actors work well together but as a cast there appeal was more as targets than as players you connect to. To close on this one, I’m going to recommend it for it’s impressive barrage of blood and chaos. Alot of humans get eaten and in the end that’s what zombie films do. 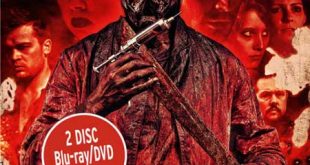