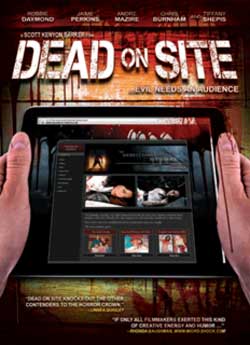 A group of film students show up at the residence of a local legend for their final project. The local legend involves the slaughter of a teenage girl and her entire family by a still unknown killer. The student’s project idea is to do a live feed from the house where every night at eight pm they will film a reenactment of each of the grisly murder scenes and broadcast it on the internet.

“This isn’t some testosterone theater….Pack it up!!”

Scott Kenyon Barker’s film Dead On Site starts by introducing two young ladies who are on their way to the mall to meet up with a friend. Anyone who is on this site can probably tell you exactly what happens next its a situation most of us are very familiar with. The vehicle that the girls are using suddenly stops working and the young teens are stranded until a forest ranger shows up to help the young ladies. There wont be much helping anyone however since suddenly a hooded killer shows up and literally, and very quickly knives everyone on camera. Barker then decides to go back to the teenagers friend’s house where she is trying to leave for the mall, her mother sends her upstairs to change and suddenly (a great nod to the classic closet murder scene in the original Black Christmas) the same hooded figure tears out of her closet knifing her to death. The killer then proceeds to stalk around the house killing every member of the family, including the teenage girls very younger brother causing the very old school credit sequence for the film to start up.

During this brief introduction to the film the viewer will notice a lot of things. Yes this is an independent film with a ton of heart and a cast and crew that truly believed in what they were making. What they made is probably one of the best of the indie slasher cycle I have seen in quite some time.

After the credit sequence Dead On Site introduces its main group of characters who are all film students who are going to the house of the murders (precredits) for their final project in school. The group is full of students who each have their own individual goals: some of them just want their grades, one of them intently wants to solve the murder case and the “leader” of the group Deke seems to get off on letting out his darker side.

We all have seen these kinds of movies so we know what is going to happen. Kids go into the house and start to film and then the killer shows up and starts offing everyone….wait isn’t that the plot of that Halloween movie I never talk about……only Scott Kenyon Barker was smart enough to do it right!

Barker wears his influences on his sleeves throughout Dead On Site, for fans of the slasher genre there are a lot of great Easter eggs to notice here. I already brought up the closet gag from Black Christmas, but Barker also toys with the idea of the phone call coming from inside of the house as well. When the “killer” isn’t getting rid of unwanted teenage flesh however Barker allows the viewer to see the trouble that the group goes through while filming their project, this is not limited to the cast actually getting cut by a prop knife to the young woman Kim-Ly’ strange power to be able to feel the energy from the murders around her.

Barker also fills his script with a ton of red herrings from an overly creepy pizza delivery guy who just so happens to invite himself over for a party to the strange legend of an outlaw named Jacob Radey who could not be killed. The killer itself however is what sells the film, Dead On Sites killer doesn’t silently stalk his victims nor does he spout off one liners before the kill. He simply and literally runs into the room with a knife and cuts everyone up and runs out. Dead On Site also sports a pretty decent body count and the crew definitely weren’t afraid to throw the red stuff around on site….hell there is even a scene involving maggots for all of those real old school horror heads out there. The cast is also pure eye candy even if they aren’t well known….Mai-Ly Duong’s performance as Kim-Ly has me convinced that she could probably beat my ass….so I am definitely giving this one two thumbs up.

I highly recommend Dead On Site if you have an itchin for a great indie slasher film….well go get it already.