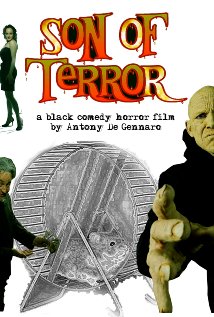 We are witnesses to a step by step transformation of a tortured soul as he becomes his alter ego, a murderous fiend who kills without quarter. The war between good and evil in his mind propels him into a hell of his own design.

You know acolytes, The Black Saint loves him some horror movies. I like em’ big budgeted, small budgeted, no budgeted. I like them when they look bad & I like them when they look good. I love horror movies people! But there is one kind of horror movie that just gets my goat. I don’t like pretentious horror movies. You know the kind I mean, the kind where the production is obviously low budget & rather than go for something that at least tries to be coherent & (relatively) exciting they go for a sort of “Experimental” type of crap to hide the fact that it’s low budget. Why do filmmakers make films like “Son Of Terror”? Is there a need to take whatever monies they gathered & instead of making something entertaining, choose to make a “Statement”? Is there an inherent need to say “Something important” rather than just make a good old horror movie?

“Son Of Terror” (Which, by the way, makes no sense as the title to this dreck) wants to tell the story of John, a wanna be professional photographer/filmmaker who is having some delusions/visions of a bald psychotic serial killer who is preying on the homeless population of the neighborhood. The question is, is he committing these atrocious acts or does he have some sort of psychic connection with the killer & can see the murders being committed through his eyes? The more burning question in my mind while watching this movie was “Do I care”? The answer is no.

The first problem I have with movies like this are the way they’re filmed. Is it all grainy because of the grade of film they had to use while filming, or because the graininess makes the film look grittier & therefore more relevant? The second problem I had with this movie is that a lot of it is played out on a TV screen that our protagonist is watching. Of course, he sees himself going about his day to day business on this TV screen as well. Is the TV a metaphor? If so, for what? I didn’t get it…and I tried people. The third problem I had with “Son Of Terror” was the story in general. In addition to his problems with work, our boy John is having problems with his girlfriend & is being called out by his friends as well for his sorry state of being. These problems combined to (possibly) release his “Inner Monster” who is killing these homeless men. The killer (Played by Alan Sutherland by grimacing tightly & licking his victims) is bald & pasty white faced and not the least bit scary. I have family members who blow this sad little prick out of the water. He isn’t the least bit frightening, he’s actually rather silly looking. Sort of like Uncle Fester without the smile or the girth.

So the movie continues along these (Boring) plot lines. Never making much, if any sense. Scenes seem to go from one to the other with no rhyme or reason. Perhaps the TV we constantly end up watching the majority of the movie through is a metaphor for how we get our opinions…through the Cathode Ray tube. Maybe not. Like I said earlier, I really didn’t care after about 30 minutes or so. But there was still about another 60 minutes of this debacle to go. The acting in the film is acceptable, barely so. The actors seem to be giving it their all, I wonder if they understood what kind of film they were making. Some of them seem to be acting like they’re in a drama of some sort & not a (Purportedly) psychological thriller.

I do have to admit that director Antony DeGenarro does what he could with a whole lot on his plate. In addition to directing, he also wrote, produced, edited, casted, composed the soundtrack, performed art/set decoration, designed the costumes & was the Cinematographer as well. WHEW!! I guess it really was his “Vision” & no one else’s. But if the f*cking thing is boring as f*ck & not in the least bit scary or harrowing, what’s the point? And what’s with the goings on during the end credits? They just make the film more confusing. I did some research after watching the film & found at least 2 different ad campaigns for the film. One describing it as a “Horror-Comedy’ & another more straightforward horror themed ad. That tells me that they didn’t know what they had when they were done with this bitch either. It certainly isn’t funny & it wasn’t scary, it’s just sitting there like a bump on a log. And why is it called “Son Of Terror”? When I received it for review I looked at the title & though I was getting one of those “Poverty Row” films from the late 40’s. The title makes no sense to me after viewing the film (Twice)! Again, maybe it’s all part of the “Vision” of the director but I think he didn’t know what to call it either.

“Son Of Terror” gets 1/2 a shroud from The Black Saint. And I’m being generous, believe me. There might have been a method to the madness here someplace. But all I got was a boring, no pace at all flop of a movie that did nothing but make me wonder what I had done to deserve this? Watch if you must, but you have been warned….Not a good film at all. And with that warning put forth..The Black Saint is going to take a break before subjecting himself to more celluloid atrocities. It’s been a long weekend & I have some Spring cleaning to do here in the mausoleum. Until then, The Black Saint has now left the building.