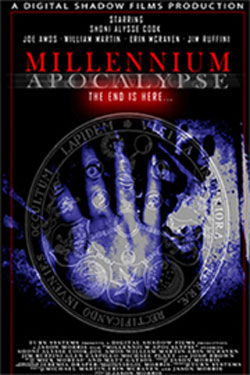 Jordan is a young woman who has visions that show her the world being destroyed. She is recruited by a government agency that her father (who has been missing for 12 years) once worked for. The agency wants her to use her visions to stop the Apocalypse from taking place, and along the way she uncovers a huge conspiracy. Will she be able to prevent the end of the world from happening and save us all? Will she ever find out what happened to her father? Is there something the government agency is hiding from her? Will you be able to stay awake until the end of this movie find out? I wouldn’t bet on it.

Oh man, where do I even begin? Watching “Millennium Apocalypse” was not an enjoyable experience for and there were a few times that I almost just turned it off before I finished it. I realize that it is a low budget production (that was originally released as a web series that somehow got an amazing amount of hits) and normally I am into that, but this film proved to be the exception.

The plot is so convoluted that I had no idea what was going on for about 95% of the movie. Even in the rare instance when I was aware of what was happening I just wasn’t that impressed and had to fight the temptation to fast forward until I saw something interesting taking place. There is just way too much going on here (or as the great Joe Bob Briggs would say “There’s just too much plot getting in the way of the story”) and the end result is basically a confusing mess that left me scratching my head in confusion. When we finally do reach the end we have a very anticlimactic conclusion that isn’t that much of a payoff.

The acting is pretty bad and Jordan (Shoni Alysse Cook) is really the only one that comes of as somewhat believable (and she is just mediocre at best). Joe Amos is horrible in the role of Christian, and most of the actors portraying the government actors are equally bad. I think that the worst actor in the film though is without a doubt Jim Rufini, who pretty much just phones in his performance without putting the least amount of emotion into it.

His final line is so cheesy that I couldn’t help but laugh even though it is supposed to be dramatic and serious (I think). Normally bad acting doesn’t bother me and there are some instances where it actually comes off as charming, but that just isn’t the case here. The acting is just plain bad and if you are looking for a movie that features at least sub par acting I suggest you search elsewhere.

“Millennium Apocalypse” is supposedly connected to the old show “Millennium” that aired on FOX in the late 90’s (and starred genre great Lance Henricksen). I wasn’t aware of this until after I had watched the movie and read about it somewhere online. While I didn’t really care for this film at all I will have to admit that cool that the filmmakers were such fans of the show that they were willing to make a movie about it. With that being said I can’t help but feel that they fell a little short of what they were trying to accomplish. Maybe I would have appreciated the movie more if I had followed the show but since I only saw it a handful of times I just couldn’t get into it.

Even though it had numerous flaws I have to commend the filmmakers for giving it their best shot. I have been a part of several low budget horror films (some of which I actually wrote and directed) and I know how frustrating it can be to produce a film yourself. I admire these guys for following through on it to the end and regardless of my personal opinions on their film I applaud them nonetheless.

“Millennium Apocalypse” just wasn’t for me. It was confusing, more than just a little boring, and the acting left a lot to be desired. I am not going to say it was the worst movie I have ever seen but I don’t think I would ever watch it again. However, if you were a fan of the show and the movie sounds appealing to you I suggest you check it out, just don’t expect to see a masterpiece.