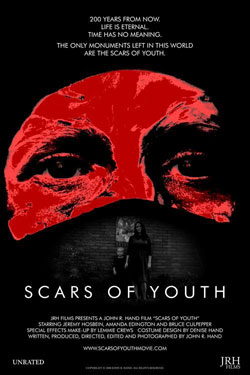 200 years in the future a group of people live in the woods and try to avoid the mysterious men in the white suits (that look like the ones used in the original “The Crazies”). A young man named Paul deals with the fact that his mother has a black fluid flowing through her body that slows down the aging process but keeps her in a drugged out state and causes scarring on her body. Will he be able to save her or is she a lost cause? Who are the mysterious men in the white suits? Why does Paul keep talking to himself?

“Scars of Youth” was one of those movies that was so convoluted that I had no idea what was going on the entire time I was watching it. As a matter of fact I ended up with a headache while watching it as I tried to figure out just what the hell was happening. The film is a boring, confusing mess and it took all of my self control to not stop it and take it out of my DVD player before the end credits rolled.

I am really not into sacrifice movies so that may be why I just couldn’t get into it. I think writer/director John R. Hand was going for a “1984” or “Fahrenheit 451” kind of movie but he couldn’t quite pull it off. It reminded me more of the obscure 1983 Raul Julia movie “Overdrawn at the Memory Bank” that the MST3K guys had a field day with several years ago. It tries to be an epic, post-apocalyptic sci-fi movie but instead comes off more like a bad episode of the original “Dr. Who.” I’ll admit I wasn’t the target audience for it, but I think that even most sci-fi fans won’t really be that into it that much either.

It also tries way too hard to be artsy as well. There are several times where it goes to black and white, there are very long, lingering shots of nothing at all (such as ants scurrying around for several moments for no obvious reason as well as what seems like endless scenes of Paul sitting around talking to himself). At the end of the movie we have a quote from Thoreau’s “Walden (which is one of the most boring pieces of American literature of all time in my opinion).” I am all for artsy, independent films but when you go out of your way to make them artsy it usually backfires as was the case with “Scars of Youth.”

One of the biggest problems I had with it was the fact that it was just so mind-numbingly boring. Seriously, nothing important happened during the duration of the film and I came close to falling asleep more than once as I waited for something exciting to happen. It plods along at a snail’s pace and we go from scenes with Paul talking to himself to him having numerous conversations with his mother (who is very hard to hear at times as she has the tendency to mumble”, to the two guys walking around in white suits interacting with a couple of kids to a slew of flashback sequences. By the time I finished it I was bored out of my skull.

The acting is just OK as Paul (Jeremy Hosbein) seems to want to be somewhere else most of the time that he is on camera. I don’t really think that he is a bad actor, but I think he just had a bad script to work with so he didn’t really put much effort into the role. His actress playing his mother just does so-so as well (when you can actually hear her)and looks pretty good naked as she is pretty hot and has a very nice body. To be honest the only time the movie ever really held my attention was when she was walking around nude (something that she thankfully does a couple of times). “Scars of Youth” doesn’t have the worst acting I have ever seen, but at the same time I’ve seen a lot better in my lifetime.

Have you ever had someone tell you a long, complicated story that you really didn’t care about in the first place and when they were done you didn’t have a clue what they were talking about? That pretty much the best comparison that I can make when it comes to my feelings about this movie. Maybe I just missed something and someone else who watches it may think that it is brilliant. As I have already said, I am not much of a sci-fi fan (“Star Wars” is pretty much it for me when it comes to sci-fi and I am really not that crazy about it) so “Scars of Youth” obviously wasn’t made for people like me. It wasn’t the most horrible film ever but I am sure not going to be in any hurry to watch it again. Check it out if it sounds like your cup of tea, you may see something in it that I didn’t.