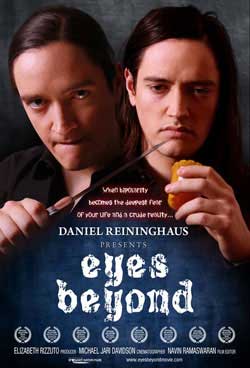 The Morales brothers are new to town so their next door neighbors the Rogers pay them a visit to welcome them to the community (and give them a set of steak knives, which is an odd housewarming gift if you ask me). The Rogers decide to stay for dinner but soon regret their decision as they soon end up experiencing a night of sheer terror at the hands of their hosts. Sometimes people (and things) aren’t exactly what they seem.

Eyes Beyond” is one of the best short films that I have seen in a very long time. It is disturbing, brutal, a little depressing, and it stays with you long after the end credits have rolled. To put it simply it packs a hell of a punch and left me reeling (and a little sad as well).

I think that one of the things that I liked most about “Eyes Beyond” is that it starts out with a fairly simple plot but then things get a little complicated. We start out with a normal family being terrorized by their psychotic new neighbors (for no obvious reason other than the fact that the brothers are bat sh*t crazy it would seem) and then we are treated to not one but two really cool twists that you will never see coming in a million years ( I know I sure didn’t see them coming). That hack M. Night Shyamalan needs to watch this short so he can take notes on how to really create an effective twist.

I thought that the cast was very good as well. Writer/director Daniel Reininghaus pretty much owns as Gabriel, the more psychotic (and talkative) of the Morales brothers (and was it just me or did the brothers remind anyone else a little of the psycho brothers from “Blood Diner?”). I also liked the Rogers’ daughter as well and felt bad for her because of what she is forced to endure at the dinner party as she gets the worst of it in my opinion (plus what happens to her while her parents have no choice but to watch made me think of an equally unsettling scene from “Henry: Portrait of a Serial Killer). I though that Mr and Mrs. Rogers were great too (even if he was a bit of a condescending prick) and I think that overall this short had a talented cast of actors who all did an excellent job of bringing the character that they were playing to life.

I was really surprised by the amount of violence that took place in “Eyes Beyond.” We see someone have their fingers cut off (which are then eaten), a pretty brutal rape scene, and a bit where someone has his ears sliced off. Basically the Morales brothers don’t mess around and I for one wouldn’t want to be at their mercy. These two are pretty hardcore twisted and they really seem to enjoy their work.

Some people may not like the ending but I thought that it was nothing short of genius. I can’t say much about it as I don’t want to give anything away but let’s just say that it is different and pretty damn original. I commend the filmmakers for ending it the way that they did and think that most people who watch it will agree with me.

I was highly impressed by “Eyes Beyond.” It was intelligent, powerful, well-written, and had a message that it wanted to convey. It is nice to see something fresh and original come along from time to time and I am glad that I got the opportunity to check this short film out. I would recommend it to anyone but do keep in mind that the ending is quite depressing so you may not want to watch it if you are feeling down.