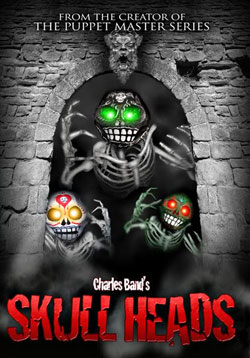 The eccentric Arkoff family shuns society to preserve the secrets of their castle home in Italy. Along with great treasures, they guard the “skull heads,” mysterious beings that have power over life and death. When the castle is raided by art thieves, violence erupts, endangering the Arkoffs as well as the criminals. Noted horror director Charles Band presents this creepy thriller, which features eerie marionettes along with a live cast.

An American family of ADDAMS FAMILY rejects lives in an Italian castle where the Dad tries to keep a reign on his daughter’s free spirited tendencies by putting her on The Rack down in the dreary castle basement for sh*t like sneaking in a cell phone or listening to an iPod. Meanwhile, a group of 3 Stooges led by a bitchy American chick worm their way into the castle posing as filmmakers scouting locations for their next big thing; but let’s face it – we all know what they’re there for.

And in true Full Moon’s patented gimmick fashion, the castle just happens to be protected by diminutive guardian angels known as “SKULL HEADS” (hence the redundantly redundant title) who not only guard and protect the castle, but who also have the ability to bring the dead back to life, and can never harm anyone unless they’re truly evil. Only these lil fellas look more like tiny Luchadores (on a steeeek) than anything remotely witty or Italian that I can think of at this moment. But make no mistake true believers, these miniature chain-smoking Rey Mysterios are more than ready and willing to call down the thunder of the 619 on anyone wishing to harm our beloved “heroes” of the castle.

Damn you, Charles Band….when I popped this flick in and saw your name on it, I was all set to get drunk and bash away at your movie like Joaquin Phoenix swinging a baseball bat at aliens. Because let’s face facts – besides the quirky charm of GINGERDEAD MAN (all hail the Wise and Mighty Busey) and about 15 total minutes of EVIL BONG, what have you done for me lately? Yes, you’ve been the creative force producing and/or directing some classics from my teen years that I still hold dear to this day. But in the last few years…dude, c’mon…KILLJOY? JIGSAW?? CUT THROAT???

But then you surprised me here….by about the 20 minute mark I was actually starting to become entertained in some strange, twisted way that I myself cannot explain, much like I cannot explain why I’m writing this portion of the review like it was an actual open letter to you…so enough of that! Doesn’t mean I’m praising this as a great movie…no, no, don’t get me wrong. But it had the potential….

See, to me, this is a case of the actors being better than the material they had to work with…I have seen Robyn Sydney in everything from BIG BAD WOLF to THE LOST, and the girl has talent. She also loves to take her clothes off in damn near every movie she’s in, and this is no exception, and dammit I love her for it. But she can also act, and that’s always a plus. Samantha Light, same with her (although she kept her clothes on, which is a crime with her body) as she reminded me of Julie Strain back in the day, and that’s a very high compliment coming from me – trust me on that. 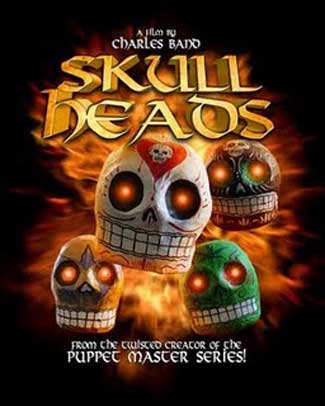 Steve Kramer was also very entertaining doing his best Bill Moseley impression here. Yes, the actors were good…the script and dialogue unfortunately was not up to par with their talents though. Writer August White (if that is, in fact, your real name…) has a decent eye for scenes and setup, I’ll give him that, but a bad ear for dialogue and a penchant for plot holes you could pilot an ID4 spacecraft through.

Full Moon purists, I’m sure you’re already all over this movie like a fat kid to a cupcake, spiking up the DVD sales and ensuring we’ll get a sequel in about 18 months, give or take. And that’s fine, whatever floats your boat. Me, I’m actually on the fence about this one, and that’s not like me. On the one hand, it was just unintentionally funny and over the top enough for me to be able to invite some friends over, get hammered drunk, watch it again, and actually enjoy it. On the other hand, I’m pissed about seeing good actors coming across as a bunch of Paul Walkers thanks to the dialogue and plot holes.

Hey, there’s your recommendation right there – if you enjoy getting drunk and MST3K’ing things to death every now & then, or if you’re a die-hard Full Moon Pictures fan – there you go. If you’re neither of those things, then you’d probably be better off pretending this was GIGLI and running far, far away.