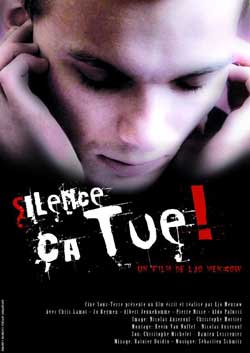 A young director disgusted by the financing system of the movie industry decides to shoot a feature movie made from live scenes without any financial support in order to denounce the difficulties to achieve a cinematographic project in Belgium. The rivalries between the cast members, the excesses and the frustrations will slowly lead him to a surrealistic disaster.

Silence, ca tue! is a micro budget recent release from BrinkDVD. Shot in Belgium (more specifically Ixelles) and spoken in French, the film follows suite like many reality TV shot programs. The story much like “Cloverfield” unveils itself in the progression of actions that take place on screen. We are quickly introduced to the film team led by high strung Chris Lamot. He is aided by his small film team of Michel and Nico. As he explains to the camera he has received a lack of support from the French community to finance his projects so he has set out to film a documentary detailing his day to day and struggles in the film community. Really we aren’t entirely sure what it is that he hopes to accomplish though as voyeurs of the new generation we follow along in his travels. 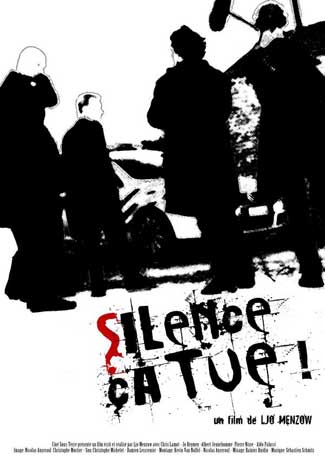 He arranges a meeting with some friend of his that will tag along as he pursues his connections. These include Morty, Aldo, François ad Hervé. The plan is rather far fetched to approach a well known producer at his house and pitch his film. In the meantime they have other plans. A call to attend a local party is presented in which they must wear suits. Upon arrival they find that the suits were in fact a sarcasm which puts them almost at the brunt of the party jokes. Morty takes the brunt of the joking as he is barraged with fat jokes most of the evening. 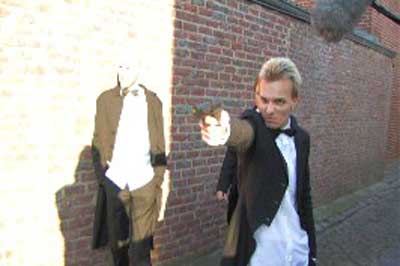 At morning they continue as planned and approach the film producer at his apartment. Though not before stopping off at a local gun shop and persuading the owner to sell them a under the counter pistol off the black market.

Things go pretty awkward with the producer meet ending at gunpoint. Out of panic the producer runs out the door and falls down the stairs. This begins the chaos. As they check on the producer they find he has broken his neck leaving them in the predicament of disposing of the body. What transpires is a visit to the local mart to buy saws and acidic chemicals. Ya, you got it…….. they are faced with the dilemma of sawing the bodies and soaking the parts into he chemicals.
So to add to the chaos in motion Morty and Chris each head out individually to add to the collection.

They feel that now with the gun as a influential device they can knock off the assholes from the night before who gave them a hard time. The gun becomes a symbol of new found power that is carelessly implemented on more than a few occasions to demonstrate a lack pf patience with folks who seemed to have made life difficult for them. Another encounter has Chris attacking his teacher who failed him from film school. We learn that Chris has struggled and just didn’t cut it as a true filmmaker which is more likely the source of not attaining funding. This blatant slap in the face is solved with a murderous response. 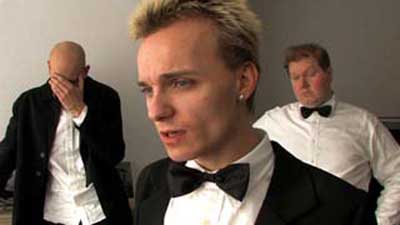 The film attempts to bring us into an obvious downward spiral of events that only gets more and more violent with time. The gun being a source of confrontation solutions becomes more of a comfort than simply arguing points. The camera men who never stop filming get the whole unfolding until the film end.

Christopher Lamot has not introduced anything new, however the product still works. I tend to more lenient on these type productions as they are not so much about the FX, cinematography or plot lines. They are a product of our current culture which proves that reality can still be fiction and produce the same level of intensity. Lamot has also managed to incorporate a subtly of dark humor into the situations. With this being fiction the situations are more easily accepted than if a real events were unfolding. The clumsiness of the actors involved also provides a dark comic relief. As far as brutality goes, the film doesn’t cross the lines of over the top any more than what is considered main stream right now. Sawing body parts and seeing them in a pool of blood is recognized a s a prop rather than say a scene of someone getting there eye cut out and stuffed with salt. For this Lamot is pretty in league with the norm rather than the “banned” list of releases that seem to keep finding there way “out” of being banned. 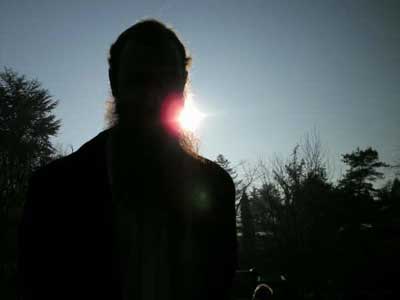 I enjoyed the journey and liked the relationship on screen of the characters. Powerful and subtle all combined ….Silence, ca tue! is a cool release!