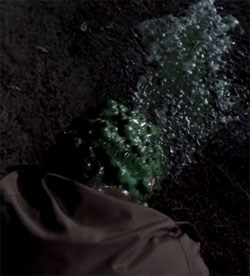 After his girlfriend leaves him, a man has unprotected sex with a prostitute and has to deal with the ensuing infection and grotesque transformation.

“The Itch” is a short film that clocks in at just under thirteen minutes, and has a great time being the kind of campy, over the top, low-budget horror movie that I expect from a one-star Sunday-afternoon horror-fest. With tongue firmly planted in cheek, it achieves this goal very well.

The opening scene sets the tone beautifully – with our everyman character (whose name is Ash Campbell, gotta love it) being left by his blonde bombshell of a girlfriend for none other than Jack Nicholson himself. She casually tosses her ring out the car window & leaves Ash standing there dejectedly holding it as he watches them peal off in Agnes (the car so cool that she gets her own credit). With the music in the background that just screams “my baby left me,” the only thing missing to make this boy look more like a whipped puppy is if it started raining. At which point, I could no longer take this movie seriously, and simply sat back and enjoyed the ride.

We pick Ash up again six months later, surrounded by p*rn & booze, drinking himself into a stupor to soulful sax music. Finally, he gives into his urges and finds his way to a prostitute who was chosen for assets other than her acting skills, which are soon covered up by the groovy p*rno soundtrack. Honestly, I laughed until I hurt.

Keep an eye on the ubiquitous and prophetic homeless man.

Ash arrives home to find oozing green puss, and then has trouble sleeping later. Props to the very budget special effects here. With the exception of the hoses being used for some of the spew effects, they look pretty good. The bubbling & oozing infection is effective enough for suspension of disbelief.

There is also a brief & unremarkable nightmarish hospital scene, but it’s all just part of the fun.

Six hours after infection (according to the caption), Ash stumbles back to the building where he earlier assumed the role of minute man (short film, remember?) to find his lady of the evening nothing more than bits remaining in a pool of goo. The infection finally takes its toll as Ash literally looses his guts & claws his face off in a climactic sustained shot of his oozing & bloody skull.

Then, suddenly, snap! The shot reverts back to reveal that all of this terrible mess has been in Ash’s head before he jumps into bed with the prostitute. He pulls out a condom, and dives right in – followed by a public service message to WRAP IT BEFORE YOU TAP IT and the credits.

All in all, I enjoyed this film for what it is – an unabashed cliché that embraces that fact without even trying to deny it. There is a great deal to be said about what can be done with a camera, some decent props, and a little editing. This film does a good job of concisely telling a very simple story with limited dialog, characters, and time. The fact is, I wish more public service announcements were this entertaining. Go well, be well, and stay well