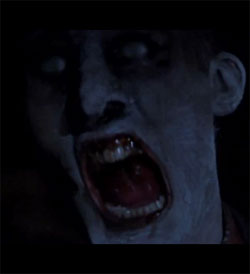 A young girl reads words out of the wrong book that summons forth an evil creature, & the usual hilarity ensues.

All right, this movie really is one of the reasons that I genuinely love short & independent film. I have a strong affinity for restrictive art forms that force an artist (writer, director, actor, etc) to really blossom – things like flash fiction, one-act plays, haiku, sonnets, & the like. “Pin” has a very economic blend of a simple plot line, minimal characters, & a very limited setting – all wrapped up in under eight minutes. According to the description on Youtube, this thing was a class project made with approximately twenty people for a horror-production class. What I wouldn’t have given to have worked on a class project like this when I was in school.

The film opens up with a young girl (Evelyn, our heroine) showing up for a last-minute house sitting session for her kinda creepy professor friend. Evidently unable to find a baby sitter of her own, she has brought her baby with her. This opening scene does a great job of isolating her from the outside world in a very short period of time.

Enter our other-worldly element – the book found as Evelyn is wandering / snooping around and settling in. She opens it, reads the words to an incantation out loud, cuts herself & bleeds on the pages. The book closes & lights begin to go out with some rather impressive creeping darkness.

A short yet undefined time later, the expected boyfriend, Ben, shows up to find the house dark & unlocked. Here we find some nice sound effects & a creepy bug moment. This is where he finds Pin – a rather dapper Victorian creature wearing funereal garb, bearing its nails – and is quickly dispatched.

Evelyn finds Ben sitting on the couch with his arm moving – but that seems to be all. Ben’s severed head falls back with a satisfying squish, and we see Pin. Evelyn runs, but in true monster fashion, Pin can lumberingly catch up with her wherever she runs in the house. She is, of course, running upstairs to protect her baby. Pin catches her at the door, lifts her up by her neck, and presumably eats her. This is a very nice moment executed with minimal special effects that really are the what give this film it’s enjoyably creepy air. She is then gutted, and hung something like a marionette.

The final shot involves the door opening, with Pin presumably going to do whatever he wants with the baby, followed by the credits.

Over all, this is a very quiet film, and conveys itself in some very subtle ways. It really is the little things that get you: the drops of blood on the page, Pin’s footsteps, the use of the bugs. This is something that I would like to see a longer, possibly even feature-length film made out of – I could very much get into the mythology behind Pin. But, then, it might lose some of its charm. Honestly, the only disappointing part of this delightful little movie really is the sudden change to the music that is used for the credits, which I do not think go with the tone of the piece. I would be very interested to see more from the members of this class come out with later.