Home | Watch Out For Midget Demons

Watch Out For Midget Demons

Writer-Director Brad Leo Ryan is working on a movie called Little Creeps.  It will be released  by The Asylum productions and has quite the unique cast.  We have in this film Dustin “Screech” Diamond, Lark Voorhies (Lisa Turtle), Jake “The Snake” Roberts, Robert Z’Dar, and Lee Arenberg from the Pirate of the Caribbean movies.  Yes we have a little bit of everything in this movie.  A lot of strange pop culture coming out of the woodwork to see this film through.

Just because something is a myth doesn’t make it fiction. That’s a philosophy that Professor Vern Drake (Arenberg) believes when it comes to the Demonicron, a book said to open the gates of hell. After locating the book, he decides to conjure the demons the book contains to do his bidding and get revenge on those who ridiculed him. However, when he only manages to translate half the words required to summon them, he only gets half size demons. Now the demons are anxious to prove that though they are half the size, they are double the trouble!

If your still not sold on this movie then I don’t believe you ever will.  The cast is the bait and the storyline is the hook.  Bite down and let’s see some midget demon action going on! 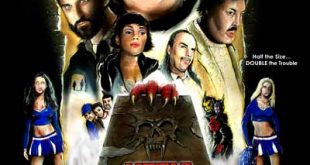 ‘Little Creeps’ around every corner