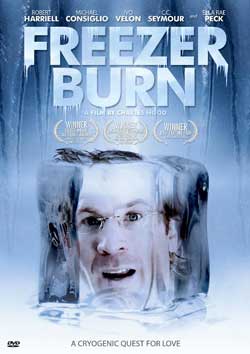 When cryogenics researcher Virgil Stamp (Robert Harriell) falls for Emma (Ella Rae Peck), a juvenile schoolgirl half his age, he schemes to use his cutting-edge technology to freeze himself and then thaw himself out 15 years later, when he and the girl will be the same age. But Virgil emerges from suspended animation early — and faces some seriously unintended consequences. Charles Hood directs this comedy; Jamie Milward co-stars.

First off, it should be known that “Freezer Burn” is not a horror film, not even a little bit. It is though, without question, everything I love about independent films. It isn’t a perfect movie, it isn’t even a great movie, but it has a lot of heart and an interesting story that was both engaging and sweet. This is a rare film that tries and succeeds in being a dramatic comedy, part love story with a bit of a sci-fi feel to it. It wasn’t a horror movie like I was planning on sitting down to watch but I instantly became invested in the story and when that happens, you just let it roll.

Virgil Stamp (Robert Harriel) is a scientist who has developed a way to freeze organs in order to preserve them for longer periods of time for transplant. He and his wheelchair-bound assistant Rex (Michael Consiglio) spend all their time in the lab trying to perfect their experiment and prep their findings for investors to keep the project rolling. After a long day of working, Virgil is the last to leave the building and lets thief Mike (Ivo Velon) into the building then goes home not giving it a second thought. At home, Virgil has to deal with the wrath of his wife Blake (C.C. Seymour), who is a school teacher.

Virgil eventually finds himself attracted to his wife’s 14yr old student Emma (Ella Rae Peck), who is a very smart, artistic, young girl. His attraction is harmless, mostly in her paintings and how she treats him. He buys one of Emma’s paintings against his wife’s wishes and keeps it in his lab where he and Rex have successfully froze a live animal and brought it back. They are incredibly excited, scientific breakthrough, fame and fortune await. Through a series of unfortunate incidents, everything blows up in his face and Virgil decides to freeze himself and come back fifteen years later when he and Emma are the same age. When he comes back, nothing is how he thought it would be.

This was a very interesting story right from the get go. The acting isn’t top notch but the characters are very well written and fleshed out enough that you connect early on with Virgil and his drive for success and his attraction to the young Emma comes off very innocent and not sick or sinister.

Their scenes together, for lack of a better word, are just very sweet. They lead in to confrontations with his wife that FAR from sweet. C. C. did a tremendous job being the bitch. You really don’t like this woman from the get go and it makes Virgil’s actions seem much more believable. Rex is the trouble make and the comic relief, while some of his jokes fall flat, his character and actions are essential to the story that moves and paces itself just right. What was so much fun to watch is the fact the cast knew they had a good script in their hands and gave their all. They meshed well together and were a perfect ensemble.

Credit must be given to writer director Charles Hood who crafted and led his crew in the right direction, creating a very unique and fun film. For a first time feature director, Hood seemed confident in the choices he made and knew exactly what direction to go without being cliche. I usually hate romantic comedies and I just don’t know how else to describe this film other than that but it really was, but this one was good. Hood wrote a solid script and where the film ends up was not what I was expecting and that helped to make the film. It is hard to complain or criticize this film for anything. It was clear that every bit of cash they had, they did their best to put it on the screen.

Independent film isn’t what it used to be. It is a rare treat to find a film like “Freezer Burn”, one that was so carefully put together, and cared about by all those involved. The movie isn’t without its flaws but it felt like a labor of love and it shows. For the movie itself, not usually my type of film but the story was unique enough to hold my attention throughout its 94min runtime. This film has won several awards at different independent film festivals and deserves every one of them. I really hope to see this talented group of actors and filmmaker go on to do other things. This is a talented group and they really deserve a fair shake. While this is normally a place for horror reviews, give this one a chance. It really deserves to get some notice. It is a good little film.