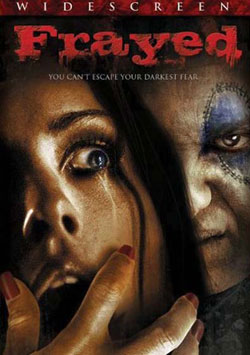 Small-town sheriff Pat Baker (Tony Doupe) is facing a worst-case scenario: His insane son, who offed his mother 13 years ago, has escaped from a mental asylum and is loose in the woods where Baker’s daughter (Alena Dashiell) is camping. To no one’s surprise, the masked psycho gets right back into the killing groove, with the suspense and wanton bloodshed accelerating all the way to an unnerving climax in this gripping thriller.

QUICK FIX:
As if the life of a small town sheriff can’t be sh*tty enough sometimes, what with speeders, drinkers, thievery, jumping through the air while firing two guns at once, firing his gun up in the air while screaming “AAAARRRRGH”, and incurring incredible amounts of paperwork and whatnot to keep him busy, life really sucks for Sheriff Pat Baker. First his young son bludgeons Mrs. Baker to death on the day of their daughter’s birthday party, but then years later the son pulls a Myers and escapes from the local psychiatric hospital and starts making his way home with one thing on his mind, and I’m betting it’s not dinner at the local In N Out Burger…

RAMBLINGS:
There are times in a person’s life, not only in my regular real life, and sometimes in my movie geek’s life, but also mainly in the “critical” part of my life…that part of my life when I put on my reviewer’s hat and pop in a new movie, that certain red flags pop up faster than my jeans when I go down to the local Stinky Finger Lounge. An example, you may or may not ask? Sure, be glad to….the first example is when I notice the running time of a horror movie when I pop it in – usually the story can be told very, very well in 75 to 90 minutes….short and sweet, right? The other is when I notice how many cooks were in the kitchen during the initial creative process…meaning, when I see more than two writers on any given single project, I usually cringe. Much less up to five writers, like you’ll find in the opening credits to FRAYED.

For the first time in a long time though, I’m happy to report that the old phrase “too many cooks in the kitchen” can kiss my muscular buttocks!! We get a sweet, heartfelt opening followed by a very graphic act of brutality, followed by the actual story unfolding with bits of tension and gore thrown in along the way.

I was very pleased by all of the actors, none of which I could remember seeing in anything else, but am looking forward to seeing again in future projects…and not that I’ll be spoiling anything major by saying this, but how long has it been in a horror movie since we’ve gotten to see the beautiful lead “teen” heroine take off her clothes for a little horizontal bop with her boyfriend, show us the goods, and still live through the end? Props to the filmmakers for breaking that taboo wide open and changing the game plan this time around.

Speaking of the filmmakers, from what I could find this was their first major project on their own (or together, depending on how you look at it) and the results were very impressive. Brutality, gore, nudity…oh, and a little thing called character development and plot…I was sold!

Any complaints? Sure – at 111 minutes, they could have told the same good story and trimmed off at least 15 minutes without losing any of the overall gut-punch that the movie delivers. Losing some of the exposition shots and soulful stares into the characters’ own worlds of self-reflection could have been left on the cutting room floor and I wouldn’t have complained a bit. And, there was really only one truly sympathetic character that I cared about all the way through till the end – the rest of the characters proved to turn into selfish, whiny bitches and whiny assclowns more often than not. But then again…maybe that’s more like real life people than I had originally thought while initially watching the flick? Hmmmm….

LAST WORDS:
What could have very easily turned into the 37 millionth HALLOWEEN clone that’s come along in the last 30 years quickly branched off into its own movie and held me captive until the twist end that I originally saw coming a mile away, only to kick me square in the nuts with one more twist that I had no clue was coming, then kicked me again while I was down with yet ANOTHER twist that I didn’t see coming either, and I had to smile to myself…yeah, they got me, and I loved it. Originally, yes, I was very a-FRAYED (good lord, am I running out of word gags so soon that I have to resort to obvious puns??) that I wouldn’t like this flick, but it did the unthinkable and proved me wrong, and I’m glad it did. FRAYED is yet another really cool indie horror flick that is waaaaaaaaay more than the typical slasher movie that it actually looks like on the surface, and is well worth checking out for yourselves and adding to your collection.