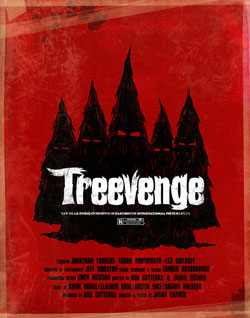 After the relentless cruelties & indignities imposed upon them by humans, Christmas trees finally have had enough & strike back on a cold & frosty morning.

A fairly well used concept in horror: take an ordinary object or creature and to turn it into an object to be feared. Horror fans are all probably familiar with stories involving the wreaking of revenge by frogs (FROGS), ants (THEM), spiders (ARACHIPHOBIA), and the like. Occasionally, you will have machine that has a bone to pick (MAXIMUM OVERDRIVE). One of my personal favorite examples is Alfred Hitchcock’s THE BIRDS. Also, we have all seen or read something where plants turn on mankind – and most likely a long time before M Night Shyamalan (THE HAPPENING) or Scott Smith (THE RUINS) ever got the idea. The short film TREEVENGE (clocking in at just over sixteen minutes) darkly lampoons the holiday season by chronicling the retaliation of the humble Christmas tree.

I had no idea what to expect from this film, and I really did laugh out loud the first time I saw it. This is sick and twisted, and there are certain things that happen here that would not be allowed anywhere but in an independent horror film – I loved it. Now, before we go much further, I must say that this is not a film to be taken seriously in the least. The acting is all over done, but still pales in comparison with how bad the special effects really are – but that is part of what makes this thing a really great bad movie.

The credits open on a beautiful, snow-covered tree farm to some very serene music. Then, enter the ax across the screen with the minor key, and the evil humans that come to harvest the trees. Now, I don’t mean just chop them down – I mean they do so with gusto, glee, and malignant intent of causing pain & suffering. It is nothing short of a massacre. Now, the funniest thing about this movie – and I love this – the trees talk – they actually have subtitles for this high-pitched squeeky language that sounds (no other word for it) SO CUTE. (“STOP YELLING! You are scaring the saplings.” – I laughed until I hurt.) Throughout the movie, humans are portrayed as showering pain and ridicule on on the poor & defenseless trees.

Come Christmas morning, the trees spring upon their unsuspecting homes – beginning with our family with 2.5 kids and the video camera. Let us not forget the two little girls in their trailer with the cute little kitty cat – you know, the ones that think they make it out safely? The couple who decide to have sex in front of their tree have probably the best death in the whole show. And please pity the poor man who decided to have sex with his tree. The scene then switches to the pandemonium in the streets, as the decorated trees show no mercy to their captors – but the thing they do with the mother & her infant child is nothing short of epic – I had to pick my jaw up as the credits began to roll .

This film does a fine job of what it set out to do, which is simply make fun of the idea of Christmas as a feeding frenzy of shopping/gift-giving and “Harmony Hut” mentality that makes your average WalMart employee curl up in the fetal position and start mumbling incoherently at the thought of Black Friday. (Did I really just say that?) Some of the death scenes are very clever, and though the special effects keep anything from becoming believable, I enjoyed myself immensely. Language & content warning, so no kids on this one. Kinda wish it wasn’t so over-the-top, and would settle down and actually be scary. Then again, I don’t think I could have taken it seriously if it had – and I do like the movie as is.

TREEVENGE can be found with a simple search on YouTube. There is also a web page devoted to it (www.treevenge.com).