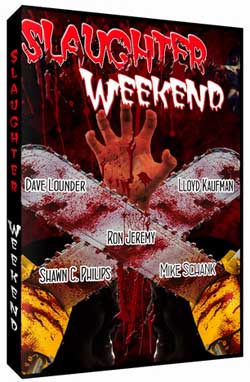 A weekend for a group of store clerks ends with slaughter.

I’ll be honest, I’m not even sure how to describe this movie. Part comedy, part horror, part gritty urban drama, part crime drama, part sex fetish exploration and well, you get the idea. It really is a mish mash if there ever was one. This film is definitely low budget but that doesn’t excuse it from one of the most crucial aspects of filmmaking and that is to tell one really good story.

That’s not to say that there aren’t some good scenes in the movie, and of those a few are pretty funny. But it doesn’t help that they are peppered throughout the film. The overall feel and pacing of the movie just seems off. It’s hard enough to try and mix two genres in a feature film but when you try and add more the results, as confirmed by this movie, become convoluted and confusing.

The movie starts off by showing us the outside of a house that is all ready for the holiday season as an impressive array of lights blink on and off. From here we see a young man in a coat returning to his apartment with a plastic bag full of bananas. Well, it’s not entirely his apartment as his girlfriend promptly exits from one of the bedrooms topless and tells him to pack up his things and go.

After another failed attempt at getting into the bedroom, he admits defeat and ends up crashing elsewhere. The next morning he is awoken by his friend who wants him to go and help him with a little transaction that he has set up. Sure it’s in the bad part of town but it’s only a trailer home inhabited by two eccentric guys. This scene plays out like it came from a Quentin Tarantino film, minus of course the stellar dialogue and nerve wracking tension.

From here on out the rest of the film shows us various oddball characters from all parts of society intermixing as their individual stories unwind. And of course here is where the problem occurs. Each story is so different in its tone that it can be jarring to jump from one to the next, especially when they are told concurrently instead of one at a time. Few filmmakers have ever been able to do this effectively, and all look to D.W Griffith’s 1916 silent masterpiece “Intolerance” to see how to do it right. I’ve seen that one several times and it is absolutely stunning.

Certainly a commendable goal to shoot for and I do have to give props to writer and director Robert Nemere for trying. Not many would be brave enough to give it a go. As for the movie, the sound was a little off at times and the acting was what you would expect from this type of budget.

P*rn star Ron Jeremy has a cameo amongst all of the madcap proceedings and wouldn’t you know that in his brief screen time he steals the show. Best line in the movie is by a man he meets that proclaims himself to be fan. “I’ve seen all two thousand, two hundred of your films. Twice.” That was priceless.

Overall I would say only see this movie if you can catch it for free and then only if you have absolutely nothing else better to do. The few good parts that are in here just can’t make up for the entire viewing experience, which unfortunately seems longer than it needs to be.