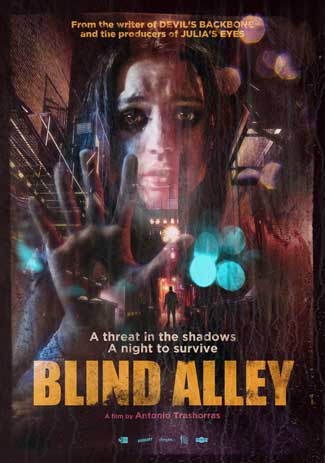 Written and directed by Antonio Trashorras, BLIND ALLEY, or CALLEJON, as it is called in Spain, is being billed a psychological thriller along the lines of the French film, HIGH TENSION. In the film, Ana de Armas (SEX, PARTY, AND LIES) plays a young woman named Rosa who becomes trapped inside a laundromat with a serial killer intent on terrorizing her throughout the course of the evening. The film marks the directorial debut of Trashorras who is best known for his screenplays, including co-writing THE DEVIL’S BACKBONE with Guillermo del Toro.

Synopsis:
“In a tiny laundrette hidden down an alleyway, Rosa finds herself trapped, completely isolated and unable to escape the nightmarish situation of being attacked by a serial killer. At the break of dawn and after hours of anguish, immersed in the sadistic game of cat and mouse the killer has subjected her to, the young girl will discover something even more disturbing about the nature of her aggressor.”