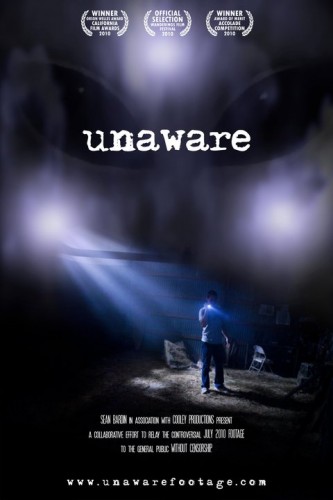 A young couple, Joe and Lisa, travel to Texas to visit Joe’s grandfather Roy; however, when they arrive unannounced, they find Roy is not home and will not be returning for a few days. Instead of leaving to stay elsewhere, Joe has other plans convincing Lisa to stay at the home for the weekend. When the visit should take a romantic turn, Joe, allowing his curiosity to get the best of him, begins to investigate the mysterious shed his grandfather keeps shrouded in secrecy. As Joe continues to unravel the secrets hidden in the shed, he draws Lisa into the adventure as well. Things take a shocking turn when they uncover Roy’s astonishing military past and discover the horrors hidden in the crates Roy keeps locked away. Once they uncover the truth, there is no escaping it.

With the success of Paranormal Activity and other recent Cinema Verite (found footage) films (Cloverfield, Quarantine and Last Exorcism – not to forget Blair Witch Project from over a decade ago), independent film makers have embraced the accessible horror sub-genre for executing their low budgeted features with a number of such films searching or preparing for release. For one such film, producer Sean Bardin was on hand at the Nevermore Film Festival in Durham, NC on February 18, 2011 for the premiere of their sci-fi twist on the sub-genre, UNAWARE. With a packed theater, the film reveales itself to be cut from the same cloth as Orin Peli’s wildly successful debut film keeping the plot of UNAWARE focused on a single couple and the location restricted to a single dwelling. The film parallels its inspiration from beginning to end perhaps even succeeding in trumping the thrills and chills toward the end; however, getting to the end is not as cohesive. When the time comes, the theater is full of screams and faces hidden behind trembling hands with the unintentional laughter (which could destroy a film like this) kept to the very minimum.

The lead actors playing Joe and Lisa, whose identities have have been kept secret, do an admirable job in keeping their portrayals honest, engaging and identifiable. They are a believable couple and that keeps the film together for the beginning of the film. Only once, when arguing over returning to the mysterious shed, do they fail to maintain the authenticity behind their their characters the film requires. The obstacles the actors encounter are more due to the drool dialog and the questionable motivations they must relate from time to time. Joe is obsessed with breaking into the shed but his obsession is never clearly depicted. For those in audience who share Joe’s unquenchable desire to rifle through all of his grandfather’s hidden stash, the journey will be more enjoyable than those who begin tear away at his actions. Joe and Lisa also bear a considerable resemblance to Micah and Katie from Paranormal Activity with Joe being more likable than Micah while Katie is more bearable than the less developed Lisa. However, the characters and the filmmakers successfully make the grandfather, Roy (a character only referred to and never revealed onscreen), a reasonably intriguing part of the story. It’s his fascinating back-story and legacy that permeates the progression of Joe and Lisa’s journey and threads the story together. 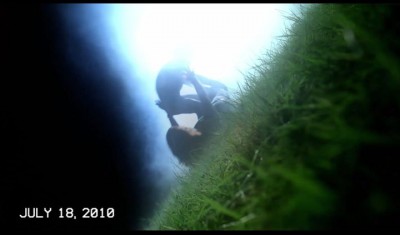 UNAWARE has minimal special effects which are remarkably effective in portraying the entities Joe and Lisa encounter, especially given the low budget the film is rumored to have. They are also enhanced by well placed lighting, camera angles and audio. When Lisa begins to scream, the intensity level shoots to eleven. It is still amazing what emotions a loud scream and a moving shaky cam can produce and UNAWARE capitalizes on that wonderfully. There are a number of times that the combination of effects, lighting and sound are successful at eliciting screams and terror. The filmmakers are blessed with an appropriately deceptive remote location (Roy’s house, shed and nearby farmland) that is slightly foreign yet still familiar enough to enable the unknown (the shed and its contents) to creep slowing into the known (the house and surrounding yard).

Unfortunately, UNAWARE takes a while getting to what the audience is on board to see and the wait may be too long and uneventful for many viewers. On the one hand, it is commendable that the producers take their time developing their lead characters and are not afraid to create the slow burn. But the development of the characters is too ordinary and mundane. They are afforded at least one cute, emotional moment early on which is effective, but even that event isn’t supported properly by further actions the characters take. When they are in the home, there isn’t much extraordinary to contradict or elevate the ordinary above resembling a home movie about family members you don’t even know. It’s too safe. Only when the story moves to the secluded shed do the events begin to display the sense of dread toward the characters.When back in the home between the visits to the shed, without that sense of dread, the time and story slows to a crawl. The film also suffers from some poor sound choices. Some noises that should be more subtle (wind or chirping crickets) are too loud and distracting while other sounds that should be more ominous (distant hums) are not prominent enough to make a strong chilling impact. Missing are the inexplicable sounds you don’t expect to find in this environment but should find in a movie whose goal is to scare its audience.

For the patient and the curious, UNAWARE provides intense thrills and chills leaving the film with an exciting, frightening conclusion. If only getting there had more chills and intrigue dispersed along the way. The more familiar or scared the viewer is with UFOs, Aliens and Roswell, the more enjoyment will be had. The film is hindered by a slow burn that explodes at the end instead of ignites along the way. For some this will make the cinematic journey less eventful as the onscreen adventure intends for the lead characters. Joe, Lisa and the overarching mystery, while interesting, have trouble filling up the quiet spaces; however, once the final act kicks in, the film roars into a scream-inducing afterlife. More so than many of its ilk, UNAWARE is for those who favor the sub-genre that inspires it. For those who seek out found-footage films, UNAWARE follows the successful formula to the letter – for better or for worse.