It was that early hour of Christmas morning where the blackness of night still lurks its tenebrous unknown beyond the window. This was the witching hour for the excited children of the world around. It was their calling Sabbath of greed upon still innocent hearts. This was the time of wonder relegated only to youth as most parents slept their unconscious temporal death.

Young Mike and Dai silently wandered in curious descent into the living room. The blinking illumination of multi-colored lights adorning the tree served as the single means of sight, dancing the familiar surroundings within surreal festivity. Presents wrapped in paper wearing the inviting faces of various winter welcome were piled like large mounds of newly discovered treasures. The two children stood before the booty entranced with smiles of sinful material lusts. They were so summoned within the various shapes and sizes of holiday spirit that they were oblivious to the creaking floorboards in the kitchen.

Mike and Dai met in gazing grin as they both tip toed to embrace what was rightfully theirs from a year of cloaking their wickedness within illusory goodness. What they found of course was something not expected, nor desired upon their Christmas lists: the severed heads of their parents each wearing a bright green bow of macabre holiday mockery. Their dual screams of utter terror fused with the tones of laughter that now cackled in the entrance to the living room. As they turned, their screams and helpless sibling huddle viewed a man of large stature. His thick white bread hung low to curve with the excessive girth of his stomach. The ivory of his beard wore yet streaks of crimson that matched the red of his suit. Within his black gloved hands held a large axe. Blood dripped from its blade, staining the once pure carpet below with human snowdrops of death.

Mike and Dai hugged one another tighter, whimpering that helpless innocence that all children do in times of danger and fright. Their cries filled the room with a kind of horror no child should have intimate knowledge of. The screams of little Mike and Dai reverberated against the shimmering ornamental globes upon the tree. Shrieks of utter hope for an awakening from what could only be a nightmare induced from the previous nights anticipation and stolen cookies for Santa Claus could not arrive soon enough for the children. Tears fell from their youthful eyes, eyes blinking in a rapid succession of hoping to awaken within the safety of their beds. Their gentle lips, lips that once spoke of the unrealistic dreams of fancy that all children rattle, now only quivered in frightful sobs. Hugging each other tighter, both Mike and Dai both closed their eyes and repeated a mantra of “please go away, we’ll be good, please go away, we’ll be good.” As if the giving spirit of the holidays had heard their wishful cries, the now last entry upon their wish list was granted. It was the last Christmas for little Mike and Dai as their final wish of “please make it go away” had been granted. The harsh swing of the axe made sure of it…

That little tale is how Christmas is celebrated within the hearth of the Horrors of Humanity, my world and lest I forget to mention to your delusional dismay, your world as well. Sociologically Christmas is that wonderful time of the year where the species wears masks of concern for others. It is a festive time where the individual dissimulates narcissism with the compassionate fakery and contrived loving kindness. Forget the religious axiom of “keep Christ in Christmas” for that brown skinned Middle Eastern Jewish heretic never was in it to begin with. Yes I said, “brown skinned”, as the historical Jesus, assuming such a man existed, was not a longhaired white male resembling Barry Gibb. That possibility alone is enough to persuade me to renounce any uncomfortable mustard seed of faith and perform the Black Mass. If such a statement offends you please do one of the following: 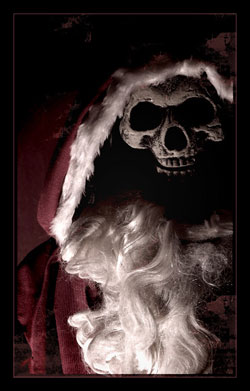 Anyway enough blasphemy, allow me to add to your holiday cheer by sharing some wonderful Christmas news with you. Don’t EVER say I didn’t care enough about you to add some happiness to your otherwise perfect existence!

On average, one in 22 reported home Christmas tree fires resulted in a death. What else did you expect when mixing electric, under paid assembly line immigrants and white trash worker standards, and trees together. Anyway, short cuts the whole natural selection thing perhaps. 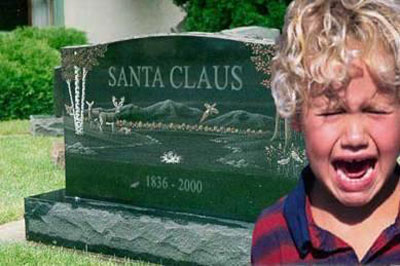 More people die of heart attacks on Dec. 25 than any other day of the year, according to a 2004 study published in an American Heart Association journal. The research team led by David Phillips, professor of sociology at the University of California, San Diego, discovered that following Christmas Day, the day after Christmas and New Years Day have the second- and third-most heart attack deaths, respectively.

That’s due to realizing how broke you now are from feeling socially forced to give gifts to people you otherwise wished were part of the one in 22 tree fire deaths. Plus add in the added stress of having to spend “quality” and “loving” time with family members and you brew eggnog laced with emotional arsenic.
To continue this thread of positivity, Planned Parenthood this year (2008-duh) is offering gift certificates for abortions. Give the gift that keeps on taking is what I say!

I lament yet that it has been pointed out in research that the there are a greater degree of suicides during the holiday seasons is a myth. Sigh, I guess you cannot have everything can you! I can, and will of course balance this out by enlightening that the overall crime rate during the holiday season’s increase. Whew! Had to eliminate that air of glass half full of the previous statement. Here! I even have a graph for you! 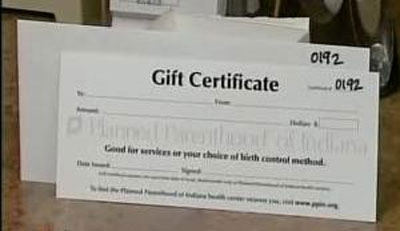 Here is a more recent holiday pleasantry for your morning reading if you are craving something specific.

Of course one cannot speak of the horrors of Christmas without mentioning one of the more famous historic examples of family celebrations, the Lawson family Christmas murders!

Here, I will make it easy for you.

Well my dear and devoted Horrors of Humanity readers, what more can I say to fill you with Christmas cheer and loving holiday spirit within the confines of a simple article? That’s a rhetorical question by the way. I really don’t care if you are full of cheer or not. I in fact suspect that you are full of something else, but I digress. So I will end this happy mistletoe kissing wrapping presents article with one sentiment that arises truly from the deepest regions of my heart.

Have a Crappy Christmas and Unhappy New Year! I hope you don’t die…well not really.