Beads of water quickly turn scarlet as steel repeatedly pierces naked flesh. Screams overpower the symphony of a spraying shower as the cleansing stream becomes the arterial splatter of death. The crumpling body grasps at the shower curtain in vein. Its once protecting vinyl now entangles wet and bleeding flesh as a mortuary shroud.

This is death experienced within a shower scene, one of the most famous visual examples of biological exit within cinematic horror. Made legendary by the bathroom hijinks of Anthony Perkins and Janet Leigh in the film Psycho, from 1960 onward no human has ever taken a shower the same again. Fast forward culturally with an inclusion of Myspace and a digital camera and we have something that is not cinema. We have perhaps another example of where art foretold the future of imitating life, albeit with gender reversal. In the case of Jodi Arias and Travis Alexander we have the obsessive unhinged female stabbing the flesh of the unaware male as he showered. Despite the overwhelming evidence of her bloody palm print upon the wall, Jodi Arias cries with a testimony of innocence. I of course am not here condemning or condoning guilt or innocence because in reality I do not care because it’s a great story!

And the short of the story is as follows. Boy meets girl, boy dumps girl, girl kills boy, girl takes pictures of boy, and girl puts up a photo tribute to dead boy after the fact on her MySpace page (myspace.com/jodiarias). Lest I forget to mention that the camera recovered at the crime scene contained deleted images of Alexander posing in the shower, dead on the bathroom floor, and Jodi lying naked on his bed. Now that’s a nice MySpace avatar! I would probably aim towards the chick on the bed picture for MySpace although I might have taken a picture of the bloody palm print but I digress.

The gory details are as follows. Travis Alexander was shot in the head, his throat slit ear to ear, and he was stabbed 27 times. No one can ever state that Jodi was not someone who didn’t complete what she started! At least she was subtle about her feelings towards Alexander and did not indulge in overkill! Yes, the pun was intended! 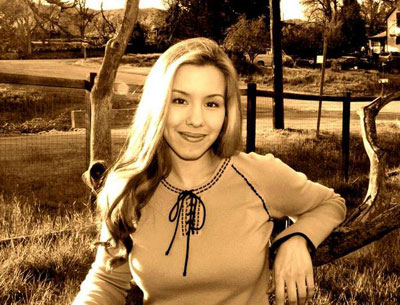 Travis was a motivational speaker in life. Of course now he only speaks for the dead. I am sure he is lying in his coffin speaking to all the corpses around him saying, “You can get out of that grave man! Just believe in yourself and you can do anything!” Perhaps he was too good of a motivational speaker. If he had been a slow talking knuckle dragging guy who was too lazy to stop playing video games on the couch, maybe Jodi would have been unmotivated to slice him into a summer sausage. Percentages and probabilities are always a fuzzy thing though.
But enough about the guy, let’s talk about the chick! As one wades through the crystal clear waters of the MySpace page of Jodi Arias one learns a great deal about her. After all, MySpace is a forum where everyone speaks the truth right? Anyway, Jodi describes herself as “Open-Minded, Artistic, Tolerant, Kind, Compassionate, Loving, Approachable, Generous, Healthy, Creative, Prosperous, Strong, Playful, Appreciative, Adventurous, Spiritual, Reflective, Responsible, Reverent.” 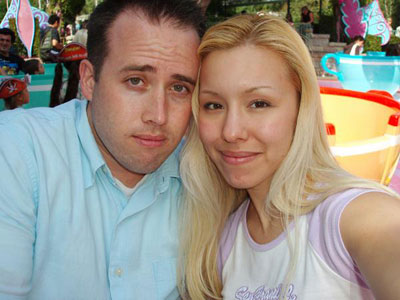 Perhaps I should update with a biographical addendum for her MySpace page. “Hi! My name is Jodi Arias. I am open-minded (I am open to carving your brains out), Artistic (with post mortem photography and carving you like a Alex-A-Lantern), Tolerant (with your screams of dying agony), Kind (of good with knives), Compassionate (enough to stab you 27 times), Loving (the slicing of your throat), Approachable (as I demanded with my gun), Generous (with eviscerations and washing your bloody sheets), Healthy (enough to stomach your bloody corpse), Prosperous (enough to afford a gun), Strong (enough to kill a dude), Playful (I stabbed you 27 times duh!), Appreciative (enough to post a photo tribute on my profile), Adventurous (stalking is fun!), Spiritual (I am Mormon duh!), Reflective (I pondered my innocence speech), Responsible (For killing you), Reverent (every night in my prison cell). Her profile continues to illustrate a well-rounded chick. Her interests list every kind of spiritual path and everything from flowers and football to quantum physics to kung fu movies. Of course she forgot to put in stalking and murder. 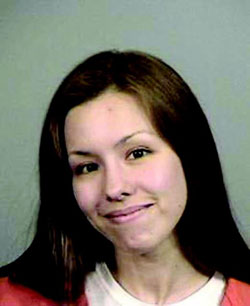 Hey I am sure Jodi has good qualities. She was pretty cute even without the knives. Forget all of her brainy interests cause who needs that in a girl right? The less she talks the more you can stuff her mouth with your Wang (cause she likes Chinese food). Jodi was the quintessential stalker every boy dreams of. Quoting from the East Valley Tribune article, “Once they broke off their relationship, Jodi would continue to hang around the house and even enter Travis’ home without his permission. Jodi was described as being completely obsessed with Travis, by his family and his closest friends.”

I reread that a few times trying to find the bad parts but just kept coming up with the same interpretation. Jodi was a loyal dedicated girlfriend that always thought about her man and really loved him! As we exist within a world rampant with divorce, adultery, and relationships laced with lies, betrayal, and infidelity, one would think having a chick who could not live without you was a good thing. Well maybe I should rephrase to “a chick you could not live without. Hell, I cannot find a chick that will put effort into bringing me a beer and dinner, never mind taking the time to stab me 27 times and shoot me in the head! Some people are just unappreciative of what they have. I will end this article with one statement. Alexander Travis was a motivational speaker all right. He has motivated me to takes baths…

Have a nice life, but have a better death!