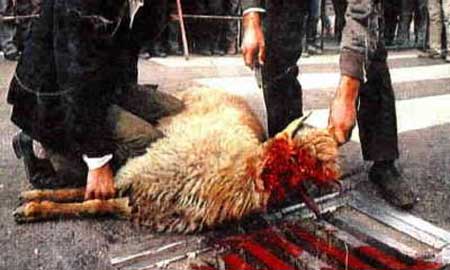 Who says films don’t influence crime? And who cares anyway? In California, a large man wearing a Michael Meyer Halloween mask raped a woman while carrying a large knife. Donald Pleasance was not there to try and shoot him.

There’s an old Roald Dahl story called “Lambs to the Slaughter” in which a woman beats her husband to death with a lamb, which she then serves to the investigating police officers who happily devoured the evidence. I thought of this when reading this latest article. In North Carolina, an attempted carjacker was beaten by a turkey and suffered head wounds. He was caught. He will be charged with carjacking and being incompetent as f*ck.

A 15 year old Florida girl fatally shot a classmate, a former friend. The killer and her friend became estranged, prompting the girl to murder her friend so she too could understand what it is like to suffer. She turned herself in- at a seafood restaurant. I’m sure none of her ‘friends’ will ever reject her again.

Another murder by a youth. An 8 year old boy killed, in cold blood, his father and a tenant who was living with them. The Arizona kid kept a log of all of his spankings, and had set a limit of 1,000 spankings. Apparently the father exceeded the limit and the 8 year old boy planned and carried out his execution. He is being charged with murder and not obeying the Commandment to honor his parents.

Surprise, surprise, another absolutely atrocious crime committed by teens. Two teen girls who were working at a nursing home abused the elderly residents. They spit in the mouths of dozens of geriatrics suffering from Alzheimer’s Disease, dementia and other illnesses, as well as fondled their genitals, and taunted and harassed them until they cried and screamed. 8 teens in total were in involved. At school they would joke around about their misdeeds and laugh. Their first names are Briana and Ashton. None of them will be facing incarceration.

And now a heinous crime with a child as the victim. This story is really awful, very tragic. Sacremento, California- A 17 year old teen staggered into a gym dragging a chain shackled to his bloody leg- he was naked except for boxers, covered in bruises, cuts, scars, and dirt. He was terrified and begged them to protect him, after which he curled into a fetal position. He had been kidnapped and held captive for over a year after years of abuse.

When he was a young teen, his father beat him and the state took custody of him and put him in the custody of his aunt, who has been charged with torturing another child. She tortured him by using martial arts weapons, spatulas, broomsticks and coat hangers to beat him, and when he was taken from her police found extreme bruising all around his body and his lip was split and bloody.

The government placed him into a foster home, from which he disappeared over a year ago. He escaped from the home, was kidnapped and kept prisoner and abused for an entire year. For one second the couple who was holding him hostage looked away and he bolted into the gym next door, shocking the patrons with his appearance and pleas for protection. The husband and wife that held him for a year were both charged. The wife is a Girl Scout leader. The aunt was also charged in the case.

A chaplain was called in to counsel traumatized police officers who handled the boy after arriving at the gym to pick him up.

In the last update in the case officials determined that his aunt was not a blood relative after they arrested her.

This week’s sex slang term- VAMPRIE’S TEABAG, which is a sanitary napkin. Thanks to www.amatory-ink.com for that.

I have several other news articles for my next column, including a syringe in a hamburger, bodies in a freezer, and a suicide broadcast live on the Internet.

Tags Lambs to the Slaughter