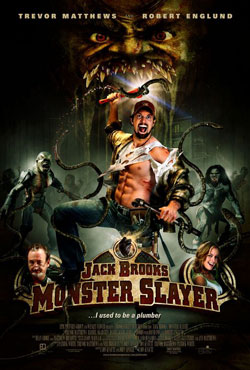 After witnessing his family’s violent murder, Jack Brooks (Trevor Matthews) develops an uncontrollable anger problem, but the night classes his girlfriend (Rachel Skarsten) suggests to cure Jack’s “issues” end up making them worse when his professor (Robert Englund) undergoes changes. Suddenly, Jack is the only person on Earth who can bring an unspeakable evil to its knees — but is he cut out for monster slaying and ready to face his demons?

While helping out his teacher Professor Crowley, Jack awakens an ancient evil buried deep in the ground that seeks a new body to inhabit. Crowley curiously digs up that evil, to find a beating heart that soon overtakes him and start’s the madness in motion.

Jack Brooks is a hell of a fun-filled ride for horror fans of all sorts. Monsters, creatures, and things of dark nature pop up at every corner in this film. Director Jon Knautz brings us a dark and comedic story of local plumber Jack Brooks. Traumatized as a child seeing his family get attacked by a monster, he is just trying to just get thru the day without losing his cool. Aided by his psychiatrist, he tries to understand his tempter tantrums to find his place in this world. It’s not until facing his demons and taking on the evil Professor Crowley (in creature form) that he finds his true calling as a monster slayer. This act of heroics transforms him into a true warrior against monsters of all sorts as he searches the world over to destroy the earth’s vilest creatures.

Trevor Matthews and Robert Englund give great performances that light up the screen. Englund is at his comedic best as he transforms from man into monster with results that need to be seen. It’s Jim Henson’s worst nightmare with tentacles to boot.

The actor Trevor Matthews was perfect in his role as Jack Brooks bringing an energy to the role needed to really translate the emotional dynamics of the character.

It was refreshing to see the work put into the creatures from an industry that relies more on CGI manifestations. I also enjoyed the extras on the DVD that were equally compelling as we are shown the complex process that went into making the Jack Brook monsters. It does make you appreciate the hard work that goes into making a monster suite and its nice to see the process from start to finish.

“Jack Brooks: Monster Slayer” is a true tribute to the old style of film making, We’ve got trolls, zombies, Cyclops and minions of evil creatures that emerge from dark places that attack without mercy.

Much like the “Men in Black” movies, this films rocks with the same energy and attitude that will satisfy horror lovers and fans of 80’s style cinema. You’ll find yourself hungering for a sequel just to keep the buzz going.

Jack brooks is a great time on screen and a true monster movie winner! 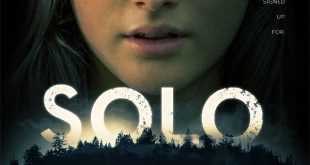