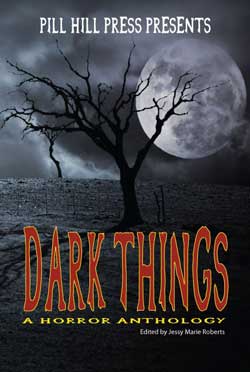 First off I have to admit that I am a big fan of horror anthologies so when I get one sent to me I get really stoked. Dark Things, edited by Jessy Marie Roberts, was no exception. This compilation of stories runs the gambit from the supernatural to the sadistic and back again. The fact that each story had something different made it all the more interesting.

“Five Minutes in Africa” by Sean Graham was a spiritual and naturalistic look into the sacred ways of the African people and the consequences of defiling a sacred symbol. This symbol, a giant crocodile, turns a documentary crew’s nature show into a deadly nightmare. A nightmare that can and will cross time and space to exact its revenge. I found this story to be exciting and suspenseful and written almost in a fable-like manner as it has a moral to be learned.

“The Butcher” by Michael Giorgio was a noir-like suspense tale about the hideous murder of a young woman and the aftermath that ensues. We encounter many characters; a butcher, a reporter, a nurse, and the victim’s little brother. We get to see the murder from the viewpoints of these various characters which challenges our thoughts on who the murderer really is. I truly enjoyed this old-style mystery.
“Restless Nights” by Matt Kurtz is the story of a man on a quest to find out what is keeping him from sleeping well at night. He relies on a prostitute to come in and watch him while he sleeps which, for the prostitute, is unusual but a welcome task. The story takes an interesting turn and we find ourselves questioning the man’s true motives. This story was well detailed and a very gripping read.

“Through the Window” by G. Elmer Munson is a story that touches on childhood fears which we may have all experienced. We learn that a young girl is terrified of the monster that lives in her closet. Reassured by her father that nothing is wrong he closes the closet door and the window (from which the girl claims the monster exits the home). This reassurance does not quell the girl’s fears and soon we find out that maybe monsters really do lurk in the closets and under the beds of children. This is the kind of story that you may not want to read right before you go to bed for you may feel that eyes are watching you from the crack of your closet door.

“Skull City” by Vince Darcangelo is about the owner of a haunted house who is giving the tour to a new employee. This story is different in that we only read dialogue from the owner and it is from his point of view exclusively. There is a lot of description and we can almost feel as if we are taking the tour ourselves. From a bloody morgue to a macabre bone-yard this haunted house seems to have it all. The only question is, what kind of people run this haunted house and is it really safe to visit? I loved the way the story was told and the general creepy feel I got from it.
“Vermillion” by Tim Reed is a sci-fi horror story set in space in an almost deserted spaceship; deserted except for two remaining astronauts who are desperate to stay alive. The spaceship had been sucked into a black hole and thrust out into another universe. The universe, unfortunately, has a dark and looming secret that proves deadly for anything, and anyone, in its path. Although sci-fi horror is not usually my genre I have to say that I really did enjoy this one.

“The Woman of His Discontent” by Robert Essig is a story about a house painter and his new unusual painting project. This project is a large house that looms with dark secrets, one of which the painter unwittingly stumbles upon. The kooky owner and his enigmatic daughter are hiding something, something of which the painter doesn’t want any part of although he may not be able to help that fact. I felt this story was very “Twilight Zone”-esque with interesting plot twists and an excellent shock factor.

“The Seamstress” by David Schembri, although short, captured the attention of the reader. This tale is about two people who are not exactly who they seem. We end up wondering exactly who the villain is and who their victim is. This a period piece in paranormal horror; I loved the eerie and gloomy atmosphere of this story.

“Melmaz for Hire” by Eric Dimbleby begins with a man who is down on his luck, lonely, and in need of some source of income. He invests in a “Melmaz”, a well-loved children’s character, costume and gets booked for a children’s party. He soon realizes what a mistake he’s made and that something sinister is waiting for Melmaz. This story was fun and darkly humorous; although brutal it still keeps us laughing until the end.
“Coming Ashore” by Holly Stacey is a melancholy tale about a girl who has committed suicide and wants desperately to escape her watery grave. A need to reach land and regret about her deadly actions cause her to ignore the warnings of the danger of going to the surface. This story is really somewhat heartbreaking but a very good read nonetheless.

“Watching Shadows” by Emma Kathryn is a take off on the character of Wendy from Peter Pan. This story, however, is not the fun trip to Neverland that Wendy experiences in Peter Pan; no this story is about the dark shadow tapping at her window late at night. What does this shadow want? Is the shadow friend or foe? These are questions Wendy wonders as she contemplates letting the shadow into her room. This story was an interesting take off on the Peter Pan story and we realize that not all fairy tales have happy endings.

“The Brick Jar” by Gregory L. Norris is about three young college students who are moving into an apartment within a large old brownstone house. The house, right from the start, exudes a bad energy and soon the roommates will find out just what secrets the house holds. There seems to be something lurking about, with negative intentions towards the new tenants. Just what exactly is hiding in the shadows? This was one of the longer stories but did not drag at all and was actually quite fast-paced. There is a lot of description and the characters seem to come alive as we follow their horrifying adventure.

“Murphy’s Law” by Mark Souza is about a private detective who is quite depressed and feels that whatever he does he is ultimately doomed. He meets a beautiful young woman who he finds himself needing to help. Unfortunately, the Murphy’s Law concept may rear its ugly head once again in the man’s life. This story is very relatable in that often we find ourselves waiting for that other shoe to drop; when things go well it always seems that something is going to happen to ruin it. This story really does reach the pessimistic side of all of us.

“Legel Manor” by Michael W. Garza is a Sherlock Holmes-esque story about a private detective sent to find the son of a wealthy woman. The son has disappeared and although the stepfather does not seem too be worried or even care, the mother is quite certain that something terrible has happened. The detective finds himself caught up in the terrifying secret of the manor. This was an interesting tale with interesting twists and turns.
“The Skitterer Across the Wastes” by Jacob Henry Orloff is the story of an Air Force pilot in the British military who had been stationed in Cairo. During this stint the man meets a woman, whom he marries, and is then sent on a supply drop across the desert. His plane takes a dive in the middle of the desert and he wanders in search of some kind of shelter from the heat. The shelter he finds, unfortunately, isn’t exactly a safe haven as he soon finds out. I enjoyed this story’s atmosphere of desperation and helplessness as it pulled us into the character.

“Complete Me” by Kurt Fawver is the story about a newly single woman trying to get back into the dating world. She finds herself attracted to a seemingly perfect man online and is ready to go on a first date with him. Everything really does seem perfect on the date but nothing is ever really perfect, right? This story goes from light-hearted and fun to dark and horrifying in the blink of an eye. I enjoyed this one very much and give two thumbs up to the twisted nature of this story.

“Scarecrow’s Apprentice” by Marc Sorondo was actually my favorite of all of the stories. I don’t normally make judgment calls like that but it really was very interesting. This story centers on a boy in his early teens who has a somewhat disturbing new hobby. He spends his days sitting in his father’s cornfield watching a scarecrow; this seems harmless at first but after the boy obsesses over it day after day, the parents begin to worry. The boy believes there is something more to the scarecrow and he wants to know exactly what it is. This story was very well written and had some wonderful description;

I was actually very excited to get to the end to find out what happens.
Overall I would recommend this book to anyone who is looking for a fun read. I think that there really is something for everyone within the pages of Dark Things. If you get a chance then check it out, I really don’t think you would be disappointed.