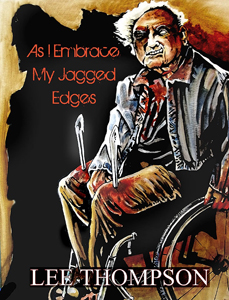 AS I EMBRACE MY JAGGED EDGES

Entrusted with a bronze shard of Solomon’s Temple, Boaz’s family has lived in constant danger. Moving from place to place, they have protected the relic from people who wanted to use its magick to procure wisdom and power over demons. It’s a demanding and dangerous responsibility; one that has taken a toll on each member of this proud and pious Jewish family.

Now Uncle Jack is dead, his throat opened up in a grisly red smile, his murderer still at large.

As Boaz sits with the body of his beloved relative, he realizes that everything is about to change. The one man who knew about and understood his taboo sexuality, and appreciated his fears and insecurities, is dead, leaving him alone to face the darkness that crouches at the doorstep ready to destroy them all. To survive, the boy must confront his internal demons and questions and steel himself to make his stand against the coming chaos.

“As I Embrace My Jagged Edges” is a short work by relative new comer Lee Thompson, it checks in at around 9000 words and is a nasty little story that packs quite a wallop. I won’t go into details of the story as the above synopsis spells it out pretty well. But I will say that this short story is pretty damn good.

Lee uses Jewish mythology to push this story along at a frenetic pace. The writing is sharp and vivid with believable characters that will gain your sympathy and/or your anger and hatred. Any author that can elicit an emotional response out of me with their characters has done their job and done it very well.

From the opening paragraph to the disturbing ending, this book will keep you glued to the pages. It is a story of duty, family, trust and what the pursuit of ultimate power can do to those who chase it.

I, for one will be following Lee Thompson closely to see what he comes up with next. Click on the story link above and get a digital edition for only $3.00. You will be hard pressed to find a better way to spend $3.00.

Also Lee has announced that he has sold his first novel to Delirium Press. I will be looking forward to reading that.