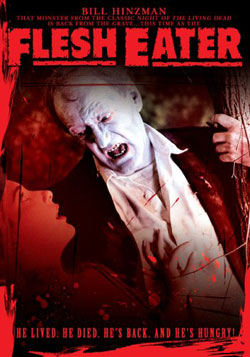 Some college kids are caught in the crosshairs of an accidentally released zombie who looks strangely like the cemetery zombie from Night of the Living Dead. Can they survive the night alone in the countryside and what kind of chaos will follow the survivors as they venture into town looking for refuge?

I love Bill Hintzman, I really do. But man this is one bad movie.

I originally saw this fugly bitch of a movie way back when I was 11 when it was called “Revenge of the living dead”. I was drawn to its cover which used an old distortions unlimited torso that I saw on the back of countless Fangoria covers at the time. Curious as to what kind of movie would have the balls to use a very well know prop for its cover and not actually anything from the movie intrigued me so I rented it. This is my earliest memory of having a good time with a bad movie.

My best friend, my little brother and myself sat unsupervised one night with a bag of sour patch kids, a 2 liter of jolt cola and we watched Revenge of the living dead. We ripped into every second of the movie. The movie was bad yes, but we had fun hating it.

The plot is as insane as it is simple. A farmer somehow finds a magically sealed coffin that has DON’T OPEN ME written all over it, so of course he pry’s the bastard open. Inside he finds none other than Bill Hintzman dressed as the cemetery zombie from Night of the living dead! This is where the movie just stops making sense and starts cashing in on the fact they have Bill Hintzman and Night of the living dead is in the public domain. I was 11 and I could figure this out, it hits you over the head with a brick it’s so easy. Ole Bill bites farmer Jimmy and the movie is off at a break neck speed.

We meet the films protagonists next in the form of a group of asshole 80’s casts offs going on a hayride or some sh*t like that. They quickly run into some zombies as the film works on the premises of one zombie biting someone and the resulting zombie makes more zombies and so on. The rest of the movie is just scene after scene of people running and hiding from zombies and taking breaks to %$%*@. Bill Hintzman from this point on only shows up to bite people if they happen to be naked women (no joke), and don’t hunt down this movie expecting grade -A- naked women, these are more the types you see operating the tilt a whirl at the carnival than you would find in the pages of playboy.

Despite my above badmouthing of the film it’s still a hell of a lot of fun if you enjoy making fun of movies as much as I do. Don’t watch this movie and expect to be moved, watch it and have a blast laughing at how bad it is, and how %$%*@ funny the 80’s were.

Let me close this with one final side story. I few years ago I was working a horror convention for Low Budget Pictures in Warren Ohio. We all ended up trapped in the hotel due to a freak snowstorm with nothing to do. People couldn’t get in to the show and no one could leave, the roads were closed. Eventually everyone ended up in a bar in the hotel’s basement singing karaoke and drinking cheap beer.

Not one for singing I sat in the back with a beer noticed none other than Bill Hintzman (in full zombie makeup) sitting alone nursing what looked like a jack and coke. I immediately sat down next to him and said “I want to know everything about Revenge of the Living Dead” “Oh you mean flesh eater” he responded, and with that we spent the entire night talking about every detail there was to know about “flesh eater” while guys like Michael Berryman sang Desperado and Prince tunes.

It was one of those nights no one believes happens, and you never forget.

-Wouldn’t you only attack naked chicks?

-The movie has more titles than he can remember as each distributor renamed the title in hopes of increasing sales.

-Despite its quality, which he acknowledges, the film was very profitable.

-He wore/wears the zombie makeup to the bar in hopes of picking up a woman, it works apparently.