When the neighborhood grandpa starts killing and eating your playmates you might want to stop and re-evaluate things. Like for instance question why he wanted you to spank him with the nail studded paddle or season yourself up. Well it’s most likely that he’s Albert Fish not the good old loving grandpa figure you thought him to be. 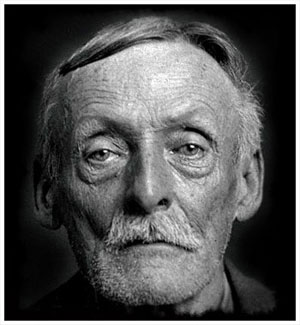 Most of the people in the area never thought he could have been a serial killer, pedophile, s ado-masochist, torture murderer, and a cannibal. Yet what they didn’t realize was that though those were actually all the traits that Albert Fish possessed while he was on his rampage of killing kids and a few others.

The body count of the Brooklyn Vampire as the police also referred him as, is still not quite known. Six is the official count that the police recorded, but he confessed to having at least one child in every state and some of them as much as two or three. With his totally leading up to around a 100 it’s still one of those unsolved mysteries. 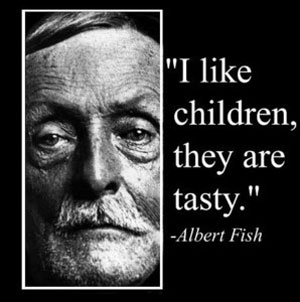 What really though gave him the thirst for these devious crimes though? Grandpa Fish was sent to an orphanage after his father died of a heart attack, he was there until he was 12. When looking at the records it’s hard to find anything from his early life since Albert was not his birth name, it was actually Hamilton.

Fish changed his first name while living in the orphanage to escape being called “Ham and Eggs” it infuriated him to the point of violence. Most of his mental illness is believed to be hereditary since most of his close family members were off their rocker.

When Fish was 12 his mother came and got him from the orphanage, she had gotten a job as a government work. That is when he would meet a telegraph boy that would introduce him to drinking urine and coprophagia.
In 1890, he had just arrived to NYC; there he became a male prostitute for money. Until his arranged marriage by his mother came around he was raping young boys on a regular basis. While Fish was married he had six kids Albert, Gertrude, Eugene, John, Anna, and Henry. His wife would leave him because he would make her and the kids do crazy things. For instance every time there was a full20moon for dinner they would have to have raw meat. 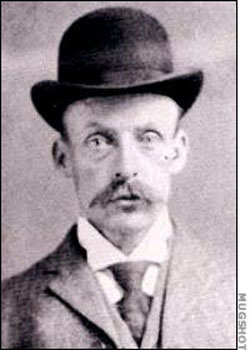 After Fish’s wife left him for another man, he started dating a mentally disabled man that took him to a museum. This is where Fish would get so enthralled by a bisection of a penis.

With the same man he would try to tie up and castrate him. The man freaked out and never visited Fish again. Around the same time he started having religious hallucinations which also stems from family members. He would than become a Masochist and start shoving needles into his pelvic. After x-rays were done they would count 29 of them permanently stuck in his groan. He would also spank himself with a nail studded paddle.

At the age of 55, Fish would say that God commanded him to torment and castrate young boys. This would stem from what doctors call religious psychosis, it would be credited to why he murdered and molested kids.
His most famous and infamous murder would be that of Grace Budd a 10 year old girl from Manhatten. Fish would come across Grace by an ad in the paper that her brother put he was a handy man. 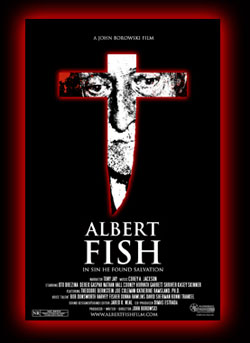 Fish would go and visit the Budd family, obviously with no intent on hiring Edward. He was mezmerized by little Grace, Fish would get on there good graces with potted cheese and wine. Little Grace would get on his lap and laugh and giggle.

Later on Fish Fish would ask if lGrace could go to a birthday party, they were hesitant at first but than ag reed. Grace would never be seen again alive.
A few years would pass and the Budd family would receive this letter from Fish. This is exactly as read with misspellings and all :

Dear Mrs. Budd. In 1894 a friend of mine shipped as a deck hand on the Steamer Tacoma, Capt. John Davis. They sailed from San Fransicsco for Hong Kong, China. On arriving there he and two others went ashore and got drunk. When they returned the boat was gone. At that time there was famine in China. Meat of any kind was from $1-3 per pound. So great was the suffering among the very poor that all children under 12 were sold for food in order to keep others from starving. A boy or girl under 14 was not safe in the street. You could go in any shop and ask for steak—chops—or stew meat. Part of the naked body of a boy or girl would be brought out and just what you wanted cu t from it. A boy or girl’s behind which is the sweetest part of the body and sold as veal cutlet brought the highest price. John staid [sic] there so long he acquired a taste for human flesh. On his return to N.Y. he stole two boys, one 7 and one 11. Took them to his home stripped them naked tied them in a closet. Then burned everything they had on. Several times every day and night he spanked them –Tortured them – to make their meat good and tender. First he killed the 11 year old boy, because he had the fattest ass and of course the most meat on it. Every part of his body was cooked and eaten except the head—bones and guts. He was roasted in the oven (all of his ass), boiled, broiled, fried and stewed. The little boy was next, went the same way. At that time, I was living at 409 E 100 St. near—right side. He told me so often how good human flesh was I made up my mind to taste it. On Sunday June the 3, 1928 I called on you at 406 W 15 St. Brought you pot cheese—strawberries. We had lunch. Grace sat in my lap and kissed me. I made up my mind to eat her. On the pretense of taking her to a party. You said yes she could go. I took her to an empty house in Westchester I had already picked out. When we got there, I told her to remain outside. She picked wildflowers. I went upstairs and stripped all my clothes off. I knew if I did not I would get her blood on them. When all was ready I went to the window20and called her. Then I hid in a closet until she was in the room. When she saw me all naked she began to cry and tried to run down the stairs. I grabbed her and she said she would tell her mamma. First I stripped her naked. How she did kick – bite and scratch. I choked her to death, then cut her in small pieces so I could take my meat to my rooms. Cook and eat it. How sweet and tender her little ass was roasted in the oven. It took me 9 days to eat her entire body. I did not f*ck her tho I could of had I wished. She died a virgin. 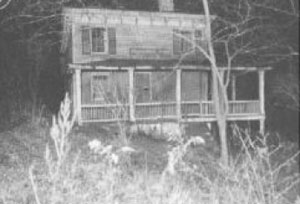 They would figure out it was him by some initials that would be on the sent envelope. While the cops waited outside of Fish’s apartments, Fish would lung at the lead investigator with razor blades. They would subdue him and no one would be injured.

After his incarceration his children would recant about games that they used to play special E2games” that had underlining tones of masochism and molestation. 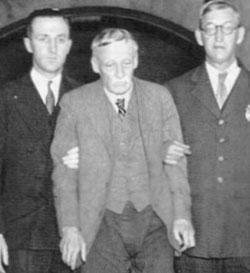 Fish would get the death penalty and be sent to Sing Sing he arrived there in 1935 and he would be executed in 1936.
He said that the electric chair would be his ultimate thrill. Well due to all the needles in his groan he got his ultimate thrill twice. It would take two jolts from the electric chair to kill him. He is buried in the prison cemetery.