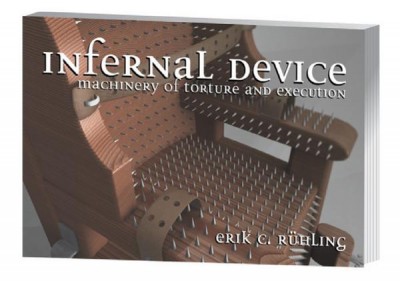 Pear of Anguish is one terrifying-looking torture device. Imagine sticking an umbrella up someone’s ass- and then opening it. The Pear is inserted into any orifice- vagina, anus, mouth, etc. Once inside, the torturer pulls a switch and the pear begins to open up, its sharp knives coming out to penetrate the inside of the body and totally destroy it.

Torture is all over the headlines. Brutal treatment of prisoners at Guantanamo Bay and Abu Ghirab. Images of beheadings on the Internet. Saddam Hussein allegedly enjoyed watching video tape of the torturing of his enemies. On the entertainment side, there is the genre that has been labeled “torture p*rn” with films like Saw. That film and its sequels featured many elaborate torture devices. So this is the perfect environment to release a torture devices graphically illustrated book.

The Punishment Chair, presented on the front cover of the book, is covered with hundreds of spikes to penetrate every inch of the body. Simply seeing the chair would often lead to an immediate confession. The power in the instrument was not just that it imposed agonizing pain but that it just looks scary and intimidating. Imagine being tied up, and the psychotic kidnapper is holding a Pear of Anguish in his hand and a Camcorder in the other- just seeing the Pear could cause a heart attack.

But one man’s painful nightmare and eternal hell is another man’s amusement, and I loved reading about the particularly nasty tortures. There were some instruments that I did not recognize- looking at their pictures, I did not know what they did or how they worked. Just looking at them was unsettling though- you really don’t want someone to get medieval on your ass, unless that is your thing.

Ruhling’s descriptions are well-written, interesting, full of historical anecdotes, and often quite funny. More than anything else, they are gruesome as he describes the torture instruments.

One of my favorite torture devices is the Brazen Bull. A big hollow bull over a stove. You put the victim in the bull and turn on the heat, burning him (or them) alive. The device is outfitted with elaborate pipes that turn the screams of agony into bizarre bull sounds. The audience can listen to as well as watch the torture, for torture was (and is) a spectator sport and form of entertainment. The first victim of the Brazen Bull? The inventor! He was tricked into going inside to see if people could fit into it, then they locked the door and turned on the fire. He roasted like a marshmallow, an agonizing death, his screams of pain made a joke by the flutes that altered it into comical animal sounds. Often entire families were shoved inside together.

Then there is the Spanish Boot- it will crush your leg so hard bone marrow will spurt out! There are many more devices, all of which I would love to own, even try out on some one.

Hundreds and hundreds of man-hours have gone into making elaborate, often beautiful instruments, created only to inflict pain and death. Barrel pillories that are elaborately illustrated and decorated. Great machines like the rack and the Catherine Wheel. The people who made these instruments really cared about their work, and they put everything they had into creating these devices. They were something to be proud of, to brag about. It was a highly skilled art form. Crushed genitals, torn flesh, removal and mutilation of external organs, piercing of the taint- these men worked to create beautiful machines to accomplish these ends.

If you are a fan of torture, or just interested in it, or you are looking for ideas for something to do on a rainy day, check out Infernal Device. And if you are a sadist, consider this the greatest p*rn ever.