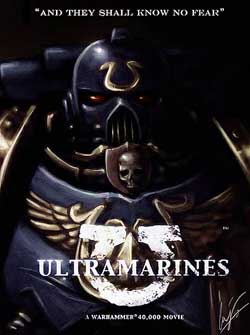 A squad of Ultramarines answer a distress call from an Imperial Shrine World. A full Company of Imperial Fists was stationed there, but there is no answer from them. The squad investigates to find out what has happened there.REVIEW:

I’ll be honest up front and say that I have never read the popular Warhammer 40,000 books. So I wasn’t really sure what to expect when I put the movie in. I found myself drawn in pretty quickly to the story and the animation and by the end of the film felt very satisfied with the viewing experience. I did some research online and found that, obviously, the movie would be a much richer experience if you are familiar with the books. Things are mentioned in the movie that, for a novice like me, didn’t really mean much. But that said, this is one entertaining flick.

The movie opens with a very cool voiceover that gives a quick idea of the setting. “It is the 41st millennium, in the grim darkness of the future, there is only war.” There is a group of warriors called Space Marines who are essentially the first line of defense from all things evil. The squads have different names and the one the film follows is the Ultramarines. When we first see them Captain Severus and Brother Proteus are training, dueling with swords. Some dialogue is exchanged and we learn that these Ultramarines are getting ready for battle. The group approaches an altar-like area of the room and in what is probably the greatest line of dialogue in the movie, we are shown the warhammer, a hallowed weapon, and told that “one day, you may be worthy enough to wield it, but till then, you may kneel before it.” Emphasis placed on the word “may.” Just too cool.

As far as the plot, it seems that another group of Space Marines named the Imperial Fists were guarding a holy relic on another planet but that contact has been lost and it is up to the new recruits of the Ultramarines to find out what happened. Once they arrive, the real fun begins. Lots and lots of gunfire ensues as the group digs further and further. It does get a little repetitive, but not to the point of annoyance. We do get a very nice twist towards the end before the final showdown and it helps propel the movie to a fantastic climax.

The planet that they land on is darn near desolate and bleak, and it definitely adds some grim atmosphere to the proceedings. One little touch that is cool is when the Ultramarines are marching in a triangular formation and one of them is in the middle carrying a banner. It reminded me of something that might have come out of the knights of old. But it also serves a very important role, that of a demon detector. And when it catches on fire, boy, you know the bad guys aren’t far behind.

The voice acting is by far the strong suit of this movie, but of course it doesn’t hurt (no pun intended) to have John Hurt on board. In reading on the web others have complained about the CGI but honestly I didn’t see really anything wrong. It’s not like the studio had the budget of a Pixar release, so I’m not sure what some of the fuss is about. Believe me, it could’ve been a lot worse. The script was written by famed comic writer Dan Abnett, who has also contributed to the Warhammer 40,000 novels. As stated above, it helps to know more about the mythology and the world of the 40,000 universe, but what is stated comes across pretty clearly.

All in all I would say that if you like animated sci-fi, try and catch this one. I wouldn’t go so far as to say and buy it, unless of course you are a fan of the books. I do think after watching the movie some people will definitely want to check out the books, which was probably one of the main intents for making the film in the first place. It never hurts to broaden the audience, and the film manages to give you just enough of a taste to get you to your nearest bookstore. Mission accomplished.