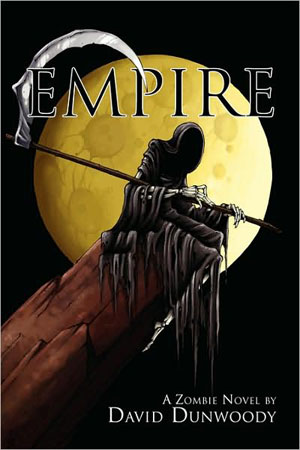 For as long as humans have been living we have been dying. If prostitution is called the “original sin” then I make the argument that the undead (in all it’s terrifying forms, from stumbling biting zombies to elegant biting vampires) should be called the “original horror”. Even now with the help of the internet there is a monumental rise in the number of Zombie Fiction stories and novels. Permuted Press, the publishers of Empire and many other fine zombie works (see also Anton Cancre’s review of “Every Sigh, The End. (A Novel About Zombies), have recently joined in a deal with PocketBooks that offers to bring seven of Premuted’s best sellers to the masses. Rightfully so Empire is among the spectacular seven.

With Empire Mr. Dunwoody crafts a great tale of a bleak post apocalyptic America, where a great plague of the undead has forced survivors to retreat inlands and abandon the coastal states. The story focuses mainly on and around the coastal town of Jefferson Harbor, Louisiana and the swamp at its border, that just so happens to radiate the dark energy originally to blame for the rising of the dead. Empire opens with a letter from the past, the first of many views into the hundred year history of the undead plague and the dismal chaos wrought in its wake, found by a group of survivors that break into the military barracks at Jefferson Harbor.

The letter, over one hundred years old and stashed in an empty control panel, explains how the swamp neighboring Jefferson Harbor is a source of dark energy capable of raising any dead with in its reach be they human or animal and that it has been doing this since the source was formed at the birth of time and space. This letter also explains how the military had been monitoring these sources, which exist all over the world, and the unholy power that ebbed from deep with in it. This is just one of the plot points that separate Empire from the lumbering horde of undead novels. There are the undead (or afterdead as described in the letter) that were raised by the military for study, by chaining corpses in the swamp till they rose. Some how over the course of studying these corpses reanimated from the swamp the military creates a virus. A deadly virus that can turn a normal warm blooded human into a rotting walking zombie interested only in its next meal. A deadly virus that spreads like wild fire toppling great cities like New York in its path, as the walking dead begin to out number the living.

The story is told from several different viewpoints following different bands of survivors left behind after the military withdraws inland to establish safe borders in centralized states. It doesn’t matter how well Mr. Dunwoody builds his characters because at any moment ANY character can be caught and ravaged by the army of zombies, this does add to the panic and desperation the characters feel. Almost every character you meet has been born since the plague began and Mr. Dunwoody does a fantastic job of catching the despair of these poor human born into a dying world. A second plot point that raises Empire yet another notch is Death. Now most horror novels talk about death in all its forms but Mr. Dunwoody has given the Grim Reaper life, an actual scythe-swinging zombie hunting life. I can’t tell you every thing about Deaths role in the story but I can tell you it is thought provoking and seriously badass.

This brings me to my personal favorite part of any horror story… the baddies. The main antagonist is a young sorcerer living in a massive house built in the swamp by the name of Baron Tetch. He is an interesting character that can control the dead raised by the dark energy around his swampy home. Tetch commands his undead and plans on rebuilding America into an empire of the undead, all to serve him and whatever wicked whims he has. With Tetch and the evil energy around him Mr. Dunwoody merges traditional zombie tales with the dark unnamed mysticism of Lovecraft with pulse pounding results.

Last, but most definitely, not least the undead themselves are varied and interesting instead of simple roving brain eating beasts. You can tell Mr. Dunwoody is a fan of zombie fiction himself with the amount of detail he puts into his walking dead creations, each a story unto its own. There is Sawbones, a twin blade wielding dog skull wearing zombie that slaughters and bags warm bloods that enter to close. There is a garbage man zombie that ends up tearing his own deadly path across Jefferson Harbor, but my personal favorite has to be the eighty year dead clown that wanders the streets hunting for prey, still dressed in the bright clown suit he died in.

I thoroughly enjoyed Empire and I recommend it to anyone looking for a well written zombie tale that features more than just the token guts and gore of the genre. And the best part, there is going to be an Empire 2, tentative 2009 release date! 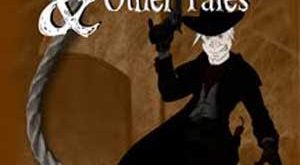