Home | Poster for ‘Resurrect Dead: The Mystery of the Toynbee Tiles’

Poster for ‘Resurrect Dead: The Mystery of the Toynbee Tiles’

Where do the Toynbee Tiles come from, and who created them? The origin of the Toynbee Tiles, sometimes referred to as the Toynbee Plaques, have long been the subject of much speculation and several heated debates. There have been countless urban legends crafted from the mysterious appearance of these mosaic tiles, and each one was painstakingly crafted before being placed in the asphalt of nearly two dozen major cities in the United States of America and four in South America. Filmmaker John Foy and musician Justin Duerr decided to do a documentary on the source of the odd messages. What they uncover is worthy of a showing at the Sundance Film Festival. 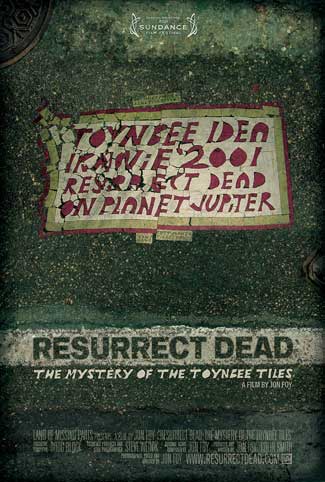 Synopsis:
“Filmmaker Jon Foy and Philadelphia-based artist and musician Justin Duerr began planning a documentary film about the Toynbee Tiles in 2000. Five years later, they began filming their investigation of these strange street plaques embedded in the asphalt of major U.S. and South American urban intersections that had held Duerr’s fascination for over a decade. Having appeared on hundreds of reported examples from the mid-1980s to present, the cryptic four-line message of the Toynbee Tiles read: “Toynbee Idea / In Kubrick’s 2001 / Resurrect Dead / On Planet Jupiter”. While the text on the plaques was clear enough, neither Duerr nor the numerous media outlets that had documented the phenomenon knew what these tiles meant, how or why they were installed, or who was responsible for them.”

RESURRECT DEAD: THE MYSTERY OF THE TOYNBEE TILES will premiere on Monday, January 24th, 2011 at 3:00 pm at the Holiday Village Cinema IV in the Public Screening #1.

Tags Resurrect Dead: The Mystery of the Toynbee Tiles