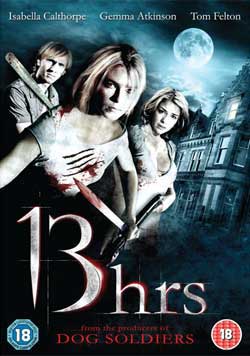 Sarah returns to her home in England to visit her family and friends. What starts out as an awkward reunion soon turns into a nightmare as an uninvited guest crashes the party and starts ripping everyone to pieces. Will Sarah and the others survive the night, or will the creature make sure that this is the last get together any of them will ever have again?

I wasn’t familiar with “13Hrs” before I watched it so I was even sure what it was about. I have to say that I was quite impressed by it and was glad that I got an opportunity to check it out. It is a great monster movie that is well-written and action packed. I had a great time watching it and have no problem urging others to check it out as well.

Why did I dig it so much? There are several reasons. I thought that the premise pretty much ruled and since it has been a very long time since I’ve seen a good monster movie I was pretty much blown away by how good “13Hrs” was. Even though I love slasher flicks above all other horror films I still enjoy the occasional monster movie every now and then, and this film didn’t let me down. It definitely delivers and I can’t remember the last time that I saw a monster movie that I dug this much.

I like the fact that the movie was pretty fast-paced and there was very little lag time (though some people on the Internet have complained that it takes it a while for anything to happen-an opinion that I couldn’t disagree more with personally). The creature gets to work tearing people to shreds fairly quickly and really doesn’t take a break from it until the end credits begin to roll. The movie can boast a pretty decent body count and if seeing death after death is your cup of tea then you won’t be disappointed.

The cast did a good job in bringing their characters to life as well. Isabella Calthorpe is excellent as Sarah, and does a fine job of going from your average everyday woman to a real badass. Peter Gadiot also did a good job as the cowardly, unlikable asshole Stephen ( he is one of those characters that you just love to hate). Gemma Atkinson was top-notch as the slutty Emily (plus very nice to look at as well. What a smoking hot body!) and probably has the best death scene in the movie just because it comes out of nowhere. Tom Felton was great in the part of Gary for the short time he was in the movie and I wish he’d gotten a little more screen time.

The monster itself is the main reason to watch the movie, of course. I don’t want to spoil anything so let’s just say that it is a vicious beast that is completely and totally thirsty for blood. We really never get that close of a look at it (we have a glimpse here and there and see more of it toward the end) but from what I could tell it looked pretty bad ass. I also dug the idea behind what (and who) it really was as well even though I figured it out before it was revealed (it was also a nice touch to have one of the characters do something that caused the monster to show up and terrorize them in the first place too).

There is a fair amount of gore here to satisfy the gore hounds too. We get several mauled bodies, some nasty bites, a rib cage ripped open, and a head blown clean off with a shot gun. All in all there is some fun gore to be found here and I enjoyed every minute of it.

Overall I really enjoyed “13 HRS.” I liked the basic idea behind it and thought that it just had a nice creepy feel to it (the storm weather taking place helps create a great atmosphere and sets the tone nicely). It is just a fun movie and I can see myself watching it again in the very near future. Do yourself a favor and check it out as soon as you can, you won’t be sorry. Trust me when I say that this movie rocks.