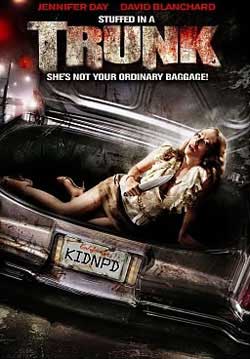 A young waitress is kidnapped out of a parking garage and shoved into the trunk of a large automobile. She struggles for a bit before she finds out that the man who has kidnapped her has set up microphones and speakers around her. Obviously this isn’t the kidnappers first time at this.

“If you don’t want a nightmare I suggest you listen to me and do what I want!”

If you would have told me ninety minutes ago that I was going to enjoy a film in which all you see for ninety minutes is a woman trapped in a trunk and a guy driving I probably would have called you a liar, that was before I saw Straw Weisman’s 2009 film Trunk.

Trunk begins by showing a young woman named Megan getting off work and walking into a spooky looking parking garage. Megan is on her phone and she complains about her ex-husband and about how excited she is now that she gets to spend more time with her daughter. Straw Weisman doesn’t hold up, in fact the entire beginning sequence of Trunk is a beautiful piece of work. The parking garage is of course dimly lit, and this is the viewer’s first glimpse at the awesome use of light and color that is used throughout Trunk. After Megan gets off of her phone she starts to walk to her car when she suddenly sees’s a small teddy bear in her path. She reaches down to pick the stuffed animal up and when she gets back up she is suddenly attacked by a man and thrown into the trunk of a large automobile. The opening credits play directly after this in a really great retro fashion as the car is seen exiting the parking garage.

When Trunk comes back on I have to say the viewer might as well get comfortable with what they see, because that is pretty much all they are going to see the rest of the film. Straw Weisman has done a great job with this low budget thriller, since the film takes place only in a constantly moving car the film builds up its scares using the dialogue from the two characters.

Megan wakes up in the trunk and of course starts to struggle. It is while she is struggling that the viewer sees the driver, his name is George, turn on a switch allowing him to hear Megan inside of the trunk. He starts to listen to her struggling in the back, even attempting to make a 911 call only to have her phone die; only after hearing her start to pray does he turn his microphone on allowing Megan to hear him inside the trunk. That pretty much sets up Trunk to the viewer, you are watching with anticipation for George to stop the car luckily Straw Weisman’s dialogue and characters are interesting enough they fill just the right amount of time. It also doesn’t hurt that Jennifer Day who plays as Megan is also eye candy while trapped in the dimly lit space.

Trunk sets up its scares by the dialogues that go on between Megan and George. George gets annoyed really easy and very often with Megan and at several points in the film he will just start screaming the same word over and over again. George informs Megan that he is taking her on a date, and he also implies that she isn’t the first one. Megan doesn’t even get to hear about the first victim of Georges crimes in all of their conversations, instead she hears about numbers twenty seven, number eight (who was one of Georges first adults) and number twenty two (who was pregnant). George has a thing for the women who are double numbers, which is a bad thing for Megan since she is number ninety nine.

Straw Weisman captures some good tension throughout Trunk, and occasionally throws in some pretty heavy sexual overtones. Before Megan even finds out George’s name there is an almost sexual conversation in which she refers to George as “daddy”. There isn’t just word play either there are two other separate scenes in which Megan pretends to pleasure herself for her capture’s audible pleasure. The first of these scenes is quite disturbing as Megan gets to hear George get his rocks off, the second time Megan gets really vulgar with a lemon lollipop. Mr. Weisman isn’t just smut however, after the first sexual scene George starts his own story about all of the things he is about to do to Megan once they stop the car, and believe me sex is the last thing on his mind.

Straw Weisman pretty much only uses the moving car as a set. There is a scene in which a police officer pulls George over and Megan thinking that she is safe starts to pound on the trunk. The officer of course hears it but George simply and calmly pulls out a gun and shoots the officer. George has done this several times before and he explains to Megan that he hasn’t got caught because he doesn’t have an MO; in fact he changes it up so often no one can relate anything to him.

George has a scared side as well Megan finds, and of course later on exploits throughout the film. George also doesn’t like to talk about himself or his past, when Megan tries to get him to he simply will start to scream and repeat himself over and over.

Straw Weisman also does an interesting trick during the scenes when George does talk about himself. As if taking a cue from films like Henry: Portrait of a Serial Killer whenever George talks about his past or one of his past victims the viewer gets to hear an audio sample of the act occurring. This can get rather disturbing in a lot of the scenes in which George’s youth is brought up and why he is the way he is.

Let’s be real though by this point in the review and the film you really just want to know what happens when the car finally does stop. Straw Weisman does a great job setting up the tension in the last reel of the film and the ending is fitting, if not just a tad bit too quick. The climax of the film does happen really quickly so one might not want to blink or they just might miss it. The final shot of the film and the audio sample played however more than made up for the quick climax. Trunk is definitely an interesting and twisted little piece of cinema that does ooze with the filth one might think when they hear the title. This however is the kind of filth that I love, see this one!