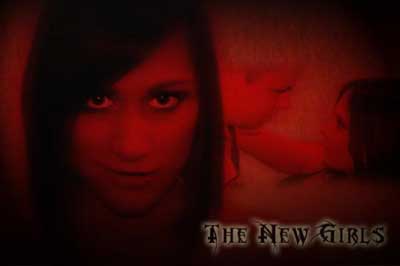 One of the most prolific filmmakers on the no-budget scene, the Jim-Van-Bebber-Through-the-Looking-Glass Sonny Fernandez, is at it again, with the entire crew in tow for his latest feature, The New Girls. This time out, we’re dealing with vampires, and…whoa, what? A daytime shot?!? Did that just happen?

Yes, yes it did, and that’s a lot of what this movie is about: something new. We’ve all seen vampire movies, and we’ve recently seen a lot of vampire sh*t that’s aimed at adolescents. What The New Girls brings to that table is interesting, in ways that Hollywood’s just never going to understand, and that’s that this movie is made by young people, understanding them. Whereas something like a Twilight is aimed at a target different from itself, used by adults in studios as a net for teen dollars, Sonny Fernandez & Co. bring to us a movie that has the urgency and youth that the glitter-vamps want, but simply can’t manage.

This movie, if nothing else at all, is authentic. It doesn’t feel contrived, pumped out by a hip team of vibrant 300-dollar haircuts in Hollywood. It feels normal because it is normal, which is something that our Californian betters don’t seem to think can be effective. They’re wrong.

Now that that’s out of the way, this movie is NOT LIKE Twilight. That’s a stake in the heart (pun intended) of anything the genre-maniacs might be interested in seeing nowadays, and it’s a stake I don’t want to plunge into this movie, because this movie has legitimate (wait for it) teeth. The differences begin and end with a vampire love story as an aspect of the plot.

From the onset, The New Girls intends malice, and it largely achieves. The movie is much tighter than previous Fernandez outings, doesn’t f*ck around for a second. Previous works of his have a beginning that meanders more, which works for those stories. Vampire stories that wander don’t make for the best on-screen endeavors, so it was nice to see one that made its intentions clear from the get-go. Oh, and there was a great bit in that 1st scene, when our new girls in town are gazing up at the moon, and it reminded me a ton of one of the best–and most quickly-forgotten–vampire movies I’ve ever seen, the Canadian vamp dramedy Blood & Donuts. If that was intentional, then color me “really impressed.”

There are no contrivances in this film, which is something that could be something that hardcore vampire fans will really appreciate. These vampires are our vampires: they hate the sun, they think crosses suck, they feast on human blood. And our characters serve a couple of purposes here, both in biting the sh*t out of dudes all over and serving as the diehard horror fan’s walking, talking essay on the state of vampirism in the modern media. It’s fun, damn it: straight-up, I-hate-sparklers fun.

Beyond the commentary, the difference in direction, the day shots(?!?) and the return to, shall we say, vampiric honesty, the rest of the movie is full of what you’d likely expect in a no-budget film, although better played this in this outing. Across the board, everyone in Sonny’s employ seemed to have a really great grasp of the intricacies of each of their characters. Where acting skills were occasionally spotty, the movie was saved by characters that were thoughtful, well-planned and ultimately organic. Combine that good writing and better, more nuanced acting and find that aspect as a solid “plus.”

The music is also varied, yet always appropriate. Piano in parts, church organs in others and some imposing choir music in the 3rd act, make for a score that always fits and never bores. The cinematography is as dark as expected, from both the subject matter’s perspective and the lack of funds, and it fits the mood…you know…’cause it’s a movie about vampires and all.

The special effects are better-but-not-great, and the fighting wasn’t up to the ass-kicking in the previous Fernandez films, which seems to really be a fault of the close quarters in which much of the movie was filmed. And say what I like, I do admit that there was definitely an odd spot here and there, where inflection or an awkward line took me out of the movie for a second. Yet again, though, it’s the tenacity and sincerity of The New Girls, like Sonny’s other movies, that make the whole project a “win.” You can’t help but root for a gang that takes so little and makes so god-damned much!