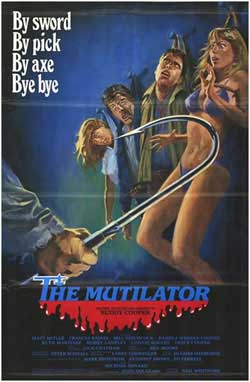 The college tradition of fall break sends many young coed’s on their way to wonderful mini vacations full of memories most of them will cherish. For young Ed and his five friends though fall break just means one more week sitting around the local tavern wishing that they would have made some sort of plans. Luckily Ed’s father calls him and lets him know that his beach condo needs to be cleaned up for the winter, Ed’s friends immediately agree that a few days at a beach condo sure does beat sitting around the local tavern. It really is too bad that Ed’s father has held a grudge against the boy for some time, and now its time for some pay back!

“So my philosophy is, let’s have some beer.”

One doesn’t watch a film like Buddy Cooper’s The Mutilator looking for great dialogue and a deep plot. A movie title like The Mutilator suggests that there will be someone mutilating people around them; even the tagline for the film suggests scenes of ultra violence “By Pick By Axe By Chainsaw Bye! Bye!”

The Mutilator begins by showing a mother in the kitchen making a birthday cake. As the mother is making the cake her son is making sure that his father’s guns are cleaned for his birthday. The boy even leaves a note on his father’s gun cabinet letting his father know that they are all clean. A freak accident occurs while the boy is cleaning the final gun however, it goes off and in a great scene of FX (so good they show it twice!) the mother is violently shot.

The father comes home and immediately sees the dead body of his wife. After chasing his son out of the room with the same gun that was used to kill his wife the husband proceeds to sit down with the corpse and share a few shots of whiskey while sirens are heard in the background. The entire scene of the husband mourning the loss of his wife is pretty creepy and it sets up what is about to happen later on in the movie.

Fast forward several years into the future and that young boy is now a college student named Ed. It is fall break on the campus and Ed and his five friends are sitting in the local tavern having some beers. The group is kind of let down since none of them bothered to make any plans for fall break and now it appears that they are going to be stuck sitting in the tavern again this year.

Things start to look up for the group though when Ed suddenly gets a call at the bar. It seems that Ed’s father wants Ed to go to his beach condo and get it shut down for the winter months. It doesn’t seem like it would really be that much work and it would allow the group to have some time at the beach. The group quickly decides what to do and quickly The Mutilator gets on its way, in a very 1980’s fashion. My only real complaint about The Mutilator is the opening and ending credits of the film.

They look almost like the credits one would find in an 80’s road trip film, even the song that plays over both credits just really doesn’t seem to fit the film. The opening credits show the group of six (there are three couples) riding in a convertible while the ending credits are actually kind of like a blooper reel. I wonder if Buddy Cooper was trying to trick his audience using this kind of opening sequence, but again one watches a movie titled The Mutilator knowing what they are about to get into.

The group of six is your standard fare set up for a slasher film. You aren’t going to see anything new and really Ed and his virginal girlfriend Pam are the only two names you really need to know. There is the wise cracking jokester whose jokes really aren’t that funny and of course the couple that can’t seem to keep their hands off of each other; like I said you’ve seen all of this before the only thing missing is a minority character.

When the group of six gets to the beach condo they find it in a state of disarray. Apparently there has been a huge party going on and empty bottles of hard alcohol are scattered throughout the entire condo. Ed’s father’s choice in interior decoration however has a lot to be desired; Big Ed as he’s called apparently is an avid hunter and has chosen to decorate his condo with a lot of his trophies. It isn’t just animal heads on the walls though there are also primitive masks used in foreign rituals and a framed picture of a man who was killed by big Ed’s fishing boat motor.

You would think the kids would get an uneasy feeling seeing the picture of a mutilated corpse in a frame, but instead they continue to look around the condo in fascination. The group does notice when they get into another room though that there is one thing that is missing, big Ed’s battle axe isn’t on its usual display. The axe isn’t on the display though because big Ed is in the garage sleeping with it and once he wakes up its going to be time for Ed and all of his college friends to pay for what he did to his mother when he was a child.

The Mutilator is your standard slasher fair in which a person stalks around, sometimes being shot in POV angles, watching the kids and striking when it is most convenient When the murder’s aren’t going on the kids are trying to enjoy their vacation time some of them play a game of monopoly, another group has a sexy romp in the swimming pool, Ed writes him and Pam’s name in the sand on the beach and eventually they play a modified version of hide and go seek while big Ed silently stalks them in the dark setting up the ending of The Mutilator quite well.

Going into The Mutilator you know that the cast isn’t going to be that great and you know the dialogue is going to be awful so one shouldn’t be let down when they find out that this is true. One watches The Mutilator to see the mutilations and Buddy Cooper delivers and then some.

Among the kills that occur in The Mutilator there is a drowning, a vicious attack with a boat motor, and a throat impaled by a pitchfork. That isn’t all however there is a rather sexual death in which one of the female characters is killed by a giant fishing hook used in a most uncomfortable way. Limbs are hacked off and throats are slit, one character is even split in two after an unfortunate run in with an automobile. The Mutilator plays out like a gore hounds wet dream during these death scenes and the red stuff is just poured out on the screen. Yet another impressive death involves a character getting a large blade of metal shoved into their face just before their head is hacked off with a battle axe!

The final climax of the film also sets up and doesn’t let down at all. There is a wonderful “last scare” moment that simply has to be seen by gore fans everywhere. Even though The Mutilator breaks a lot of the rules of the slasher genre the ultra violent deaths definitely make up for it.

If the viewer goes into The Mutilator knowing what they are about to watch is gory mind numbing entertainment they are going to have a blast. I recommend The Mutilator with a large group of friends and large amounts of alcohol cause like one of the main characters says in the film “So my philosophy is, let’s have some beer.”