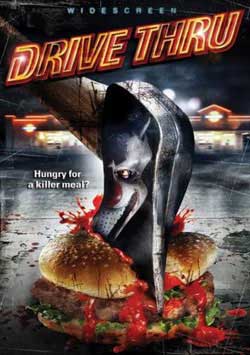 It really doesn’t take much to make a slasher movie. All you need is a cast of young stars, someone in a mask or costume of some kind to hack them up, and in most cases, a decent storyline to give a reason for why the guy in the costume is going around killing the young cast.

There really is no need to even give you a synopsis of the plot of this movie, because it’s nothing you haven’t seen a hundred times before in every other f*cking slasher movie that’s ever been made. Despite the rampant clichés that are the very fabric of this film, it’s really not as bad as you might expect. Drive Thru manages to be both pretty damn funny and entertaining, regardless of its paper thin plot and glaring plot holes.

So we’ve got a group of teenagers who are being picked off one by one and we’ve got a scary clown guy running around with sh*tty grindcore/death metal playing every time he’s chasing a victim. Of course, there are the inept cops who are investigating the whole thing, but from the beginning are made to look as if they can’t tell their assholes from their elbows.

There’s a whole subplot going on in this movie. The main character Mackenzie’s various toys become possessed and offer her a clue as to who the next victim is. It’s never actually explained as to how the killer is doing this or why, other than the screen writers thought it was a great idea. 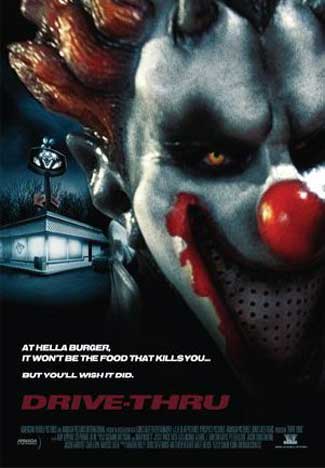 This explains a lot because the way the movie flows sometimes seems like the two writers were just sitting around in front of a big board with all of their favorite things about slasher movies cut out on little pieces of paper and then proceeded to pin them up together to form a story.

This movie rips off parts of Happy Birthday to Me, Friday the 13th, and any number of other slasher movies. Despite all of the things this movie rips off, and the constant stream of scenes and events that don’t make any god damn sense, it’s still strangely compelling. For Christ sake, Morgan Spurlock makes a cameo in this movie as a staff member at Hella Burger.

The special effects are surprisingly good, considering some of the sh*t that Lionsgate tends to release, and the acting really isn’t that bad either. The CGI used in the film is surprisingly better than most of the CGI we see in low budget horror films.

Still wondering what the f*ck this movie’s about? Killer Clown goes on a rampage picking off teenagers, but the bodies keep disappearing from the crime scenes. All of the victims are people that are Mackenzie’s friends or people she knows, and that her 18th birthday is coming up is driven into your skull to the point that they could have just been saying “This is an important plot point,” and it would have had the same effect. 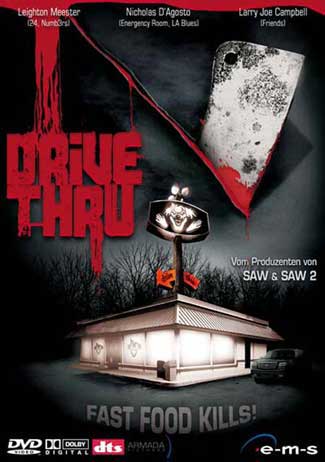 Technically speaking, it’s a solid film and looks like a professionally made horror film. The guys behind this one must have managed to scrape up a few thousand dollars to put this together, and it shows in the production design and all around clarity.

There’s a “plot twist” that pops up a little later in the film, but it’s nothing new or shocking, and in fact was probably ripped right out of A Nightmare on Elms St. Of course the ending is a mish-mash of the endings of Happy Birthday to Me and Halloween and is really the only part of the film that falls completely flat.

As much as I hate to admit it, I really liked this movie, despite it ripping off every other slasher movie ever made; it’s just so f*cking silly and fun that I can’t help but laugh all the way through it. If they had intended to make a serious slasher film, then they failed miserably and instead have given us the perfect movie to take to a buddy’s house with a case of beer and munchies and watch with a big group of people who will make comments throughout the film. I don’t know if the writers had intended this to be a horror comedy or if Drive Thru was supposed to be a satire, but if it was then they hit the nail on the head and pulled out a winner.