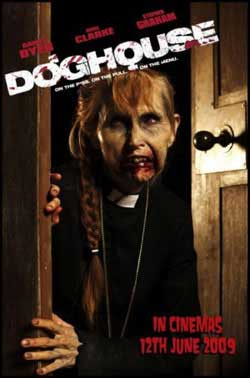 Six guys hell-bent on having a raucous weekend away from wives and lovers arrive in the town of Moodley. But something’s odd about this quaint hamlet. Where are the men? And why do all the women look like they’re thirsting for blood? The poor blokes soon discover that half the population has been wiped out by the same virus-infected, man-hating cannibals terrorizing them. Stephen Graham, Danny Dyer, Noel Clarke and Lee Ingleby star.

Vince is getting divorced. And instead of handling it like most blokes and going out for a night on the town getting piss drunk, he’d rather sit around and mope like a wanker. So his friends being true friends, and having their own women (and men) problems, they decide to take him on a weekend retreat to the middle of nowhere village of Moodley, where the women are hot, willing, and outnumber the men 3 to 1. Sounds like great odds to me too. And once they get there they find the women are indeed starving hungry for men. Only problem for the guys is, I meant “starving hungry for men” literally, not sexually. What the hell?? None of my exes ever needed a virus to turn them into mangry flesh-eaters out for blood…I thought they just came that way naturally!

We’ve all been there before, guys. We either know someone not taking a divorce or break up well, or we’ve gone through it ourselves. It sucks at first, and sometimes hurts like hell. Thankfully (and according to Dionne Warwick), that’s what friends are for. They pick you up when you’re down, call you a p*ssy for still carrying a torch for whatever psycho bitch done you wrong (whether it was her fault or yours, that’s just how dudes are to each other, God love us all), tell you that you can do better than that *insert brutal adjective here* girl, and then take you out to get you blind stinking drunk and hopefully laid in order to go from one post-heartache right into the next heartache waiting to happen when we eventually screw that one up.

And I’ve said this many times before in many other reviews, but it bears repeating…no one has handled the horror/comedy in the good old U.S. of A, with the exception of DEAD & BREAKFAST, for years as well as our friends across the pond in jolly old England. From SHAUN to THE COTTAGE to SEVERANCE and beyond, the Brits have kept the horror/comedy tradition alive with DOGHOUSE – a clever hybrid of military experimentally induced zombie virus and subtly hinted at werewolf/dog/not really sure.

All of the actors were dead-on perfect, and every time one of them got hurt, I felt their pain too. It was obvious to me that the writer had been through a similar situation (although without the crazy zombie bitches, I’m sure) as the dialogue was crisp, funny, and most importantly very true to how guys really talk to and deal with each other in that situation. Also look for the still very gorgeous and yummy Mary Tamm – the first and in my opinion still best, Romana from the Tom Baker years of DR. WHO, in a very small but pivotal cameo.

Director West has impressed me greatly in the past with RAZOR BLADE SMILE and EVIL ALIENS, and no, I don’t hold his entry into the PUMPKINHEAD franchise against him, so I was really looking forward to seeing this one, and the man didn’t let me down. I don’t want to give away any of the really cool kills, but let’s just say that there’s a very, very dark humor hiding behind almost every one, especially in the case of one military man spread out in a scene very reminiscent of WAXWORK. I can’t wait to see what he gives us next.

Any complaints? Nope….even the hints to a much bigger picture that was sort of painted for us but never shown, and the very obviously wide open ending that leaves room for the obligatory sequel should this one do well didn’t piss me off – it just made me want even more. I know that this is already on DVD in the UK, but couldn’t find a release date for the US yet…but seek this one out anyway, whatever it takes – I can’t recommend this flick enough. The battle of the sexes gets bloody as all hell and for the guys, really does become one for survival and gets more f*cked up than a soup sandwich the further it goes along. It also shows just why as men, we almost always really are in the DOGHOUSE.