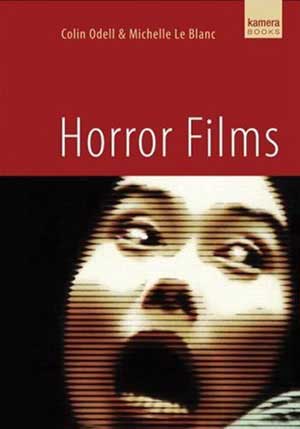 With the subject of horror being so enormous, there are alot of ways in which to author a book with directions to take. I’m always happy to see when books such as this go different routes to stand out from other such books. Colin Odell and Michelle Le Blanc are clearly scholars who know there research and are able to present there findings with great clarity and readability while still keeping things entertaining. The book begins with the actual subject of horror. What is is, where it came from, the classification breakdowns and how its defined in its many forms (such as “tension, surprise, suspense) They not only comment on the films content but how the viewers tend to create relationships with the on screen content and how it relates in different ways. We even are explained the differences between violator, victim and voyeur… all important characteristics in horror.

Surprising enough when talk of remakes, they don’t take the fan boy stand of “we’ve had enough of them” approach. They report in it honestly as its seem from the investors and there main objective of banking on familiarity rather than losing on ideas that may not work. All this and more are the insights you come across in this book.

Many of the chapters are communicated with essay like reading. Often on a page you may cover several films that correlate or relate to the cases in point. So this book is definitely geared towards more educated readers that thrive on fact and historical significance. No stone is left unturned. We start by coverage of Horror in Europe which includes German, Italian, Spanish, French and British. Each offering a culturally different set of horror components that is originated from customs, laws and ways of thinking within. One fascinating fact was the mentioning of several banned releases that in the early days were harder to come by. Cinema so brutal that the countries themselves stepped in to eradicate the content. Of course as viewers this has always been a reverse psychology of wanting them even more based on those facts. So consider alot of it an indirect guide to some pretty brutal “video nasties” Though it did take a while to make its circulation, so these films became more in demand.

The book however doesn’t belabor us with endless research results and commentaries, It actually sets the tone for a series of film title reviews. The reviews give you a bindle of quick facts, comparison, analogy and comments just enough to get the taste of each film covered. Of course there choices are reserved for more selective works as this volume would never end. I did enjoy the films covered and the insight communicated. Now for those looking for a book that reviews your favorite films and top 100 ever made, won’t find that coverage here. Sure important films are reviewed but they throw in odd film like Q, the winged serpent, 2000 maniacs and Society, so this is clearly not a fan favorite review read than a more author driven review read.

As we move further on we enter chapters such as “Horror in Asia” and “Horror in Australia”, since I know they have dedicated an entire book to just the Asian market films, the chapters are merely quicker overviews. The Australian one being the shortest. These are great “taste” builders for more in depth coverage from longer volumes specific to those countries.

There are a few color photos within, as a center piece, but the volume is mostly for intense reading. The photos seem more like a throw in than a real specific need for readers. The thing I respected most from this book was its extreme historical overview though out. Really after reading this you get a pretty firm grasp on the entire history of horror in a more condensed form. It’s alot to consume so I recommend taking in bits at a time. There is so much to take in here and therefore this book is a great addition to horror libraries and horror historians

The book like others from Kamera Books is a printed on beautiful stock and a well binded print. It also adds the bonus of a Horror Short film DVD featuring 3 shorts. I haven’t viewed them yet, but its a nice thought that readers will appreciate. 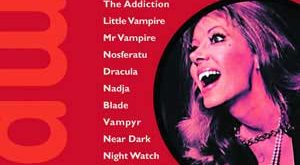