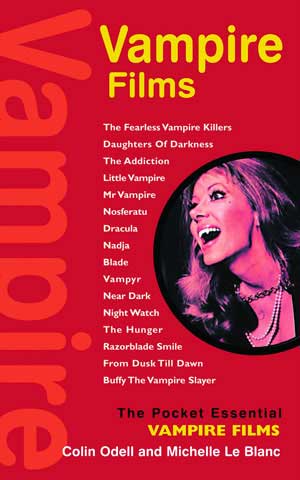 Big content under a small package! My latest book review comes in the form of the new release from Pocket Essentials called “Vampire Films”. Pocket Essentials are really cool reads. They are small but not small on information. My only wish was that there were pictures, though that would probably increase the price..so we take it as it is. ‘It’s a great book line and great for trips, long waits or to simply kickback and get your fix on a particular subject.

In this release we are hosted by the writing talents of Colin Odell and Michelle Le Blanc in 160 pages of pretty comprehensive vampirism’s.

“Vampire Films” covers the huge undertaking of a collection of vampire cinema with comparisons, history, myths, legends, style and social meanings. It is immediately apparent that these 2 did there research, which is no small task for any writer. Vampires have graced the movies in multiple forms, styles, presentations and interpretations The thing I liked most was that it swings back and forth from early portrayals to recent films such as 30 days of Night. So in essence we are given a full overview of past to present.

We are also given the benefit of sorts of vampirism such as virus, christian, sexual, cursed, fountain of youth and renegade. Depiction is focused in different ways depending on the filmmakers direction. In Lost Boys, we encounter it to be a ageless advantage of power. Still bound to certain vampire realisms but free from aging and the benefit of increased strength. We are also told of the curse that watches loved ones die as they grow old and the yearning for death to end the monotony. Further in they talk about Vampire commercialism, serial killer connections and a whole slew of vampire breakdowns.

Famous figures such as Vlad, Bathory, Carmilla, Bram Stokers Dracula, and others are explained and their individual contributions to the vampire lore.

Still to this day, the idea of vampirism hasn’t slowed down one bit. As much as the trend has been covered numerous times to the point of redundancies, we still flock with anticipation of the next vampire movie product released. So does a section of the horror genre deserved this much attention? Absolutely! I found the book to be educational and a fun read. It’s not weighed down with overly long boring essays on the historical aspects from past to present. It uses past and present to introduce comparisons in the filmmaking methods and story telling similarities.

Even a die hard vampire fan might pick up a few new recommendations to check out and learn a bit about they background of the numerous interpretations. Now if your like me, I tend to have a more selective interest in the vampire mythology. While we do have the earlier coverage of Hammer films, days of Bela Lagosi and its early exploitation era, I found more interest in the newer wave of vampire films that inject the modern high energy. They cover films as recent as 30 Days of Night, franchises such as Blade, Underworld and Dracula 2000, and even the sci-fi influence of vampire films.

This book is a nice little package, its made to fit in your back pocket and has the goods for vampire enthusiasts. You’ll enjoy the historical contribution and learn things about films you may have never known. The fading of Legosi into morphine addition, the original of Asian hopping vampires and how there kung fu moves influenced US vampire series, the tales of serial killers who took on vampire like traits and much more. If anything, one thing is clear the public has not lost its fascination for these human-like creatures that have bled into every form of film media up to today. I’m sure you’ll enjoy this book as a nice overview of the trends and fascination with this aspect of horror history. 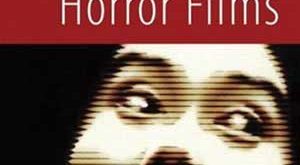 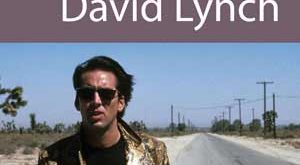